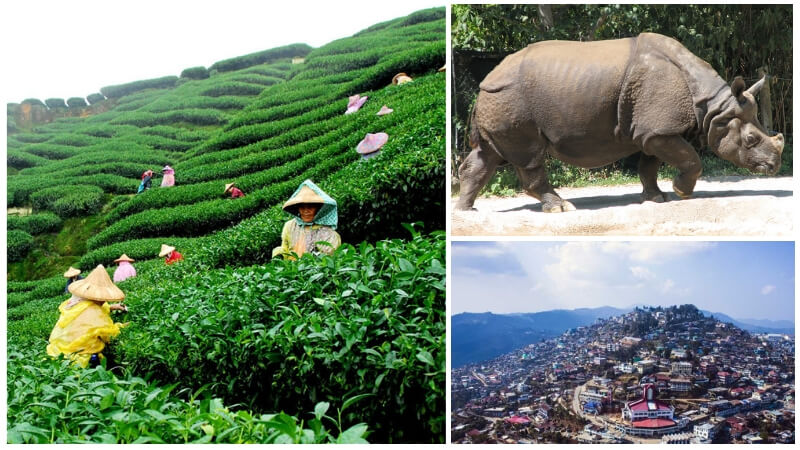 GK Quiz on Assam is one of the major topics in all state level competitive exams under General Knowledge. Even Central Government Exams like UPSC, IBPS, SSC, Railways and Postal Exams focus more on Individual States.

Attend our GK Quiz on Assam and don’t forget to share your marks!!!

1. In Ancient times, Assam is also known by the name of
a) Kamarupa
b) Guwahati
c) Pragjyotishpur
d) Both a and c


Click here to View Answer
Answer d) Both a and c. The precise etymology of modern anglicised word “Assam” is ambiguous. In the classical period and up to the 12th century the region east of the Karatoya river, largely congruent to present-day Assam, was called Kamarupa, and alternatively, Pragjyotisha.

3. Which is the Assam state Tree?
a) Pipal
b) Chinar tree
c) Rhododendron
d) Hollong

4. Which is the Assam state Flower?
a) Foxtail orchid
b) Lotus
c) Pink rhododendron
d) Nagesar

6. Which of the following does not share border with Assam?
a) Nagaland
b) Manipur
c) Meghalaya
d) Bihar


Click here to View Answer
Answer d) Bihar. The state is bordered by Bhutan and the state of Arunachal Pradesh to the north; Nagaland and Manipur to the east; Meghalaya, Tripura, Mizoram and Bangladesh to the south; and West Bengal to the west.

7. Which state has ‘O Mur Apunar Dex’ as its state anthem?
a) West Bengal
b) Assam
c) Tripura
d) Mizoram


Click here to View Answer
Answer b) Assam. It was written by Lakshminath Bezbarua and attuned by Kamala Prasad Agarwala. The song itself is from among the finest poems created by Laxminath Bezbaroa. It was first published in 1909 in an Assamese magazine named Bahi. It was officially adopted as the Assam’s state song in 1927 at “Assam Student Conference” held in Tezpur. The song is also included in Kadamkali authored by Bezbaroa.

8. According to a late text, Kalika Purana, who was the earliest ruler of Assam?
a) Naraka
b) Samudragupta
c) Chandragupta
d) Mahiranga Danav


Click here to View Answer
Answer d) Mahiranga Danav. According to a late text, Kalika Purana (c. 9th–10th century AD), the earliest ruler of Assam was Mahiranga Danav of the Danava dynasty, which was removed by Naraka who established the Naraka dynasty. The last of these rulers, also Naraka, was slain by Krishna. Naraka’s son Bhagadatta became the king, who (it is mentioned in the Mahabharata) fought for the Kauravas in the battle of Kurukshetra with an army of kiratas, chinas and dwellers of the eastern coast. At the same time towards east in central Assam, Asura Kingdom was ruled by indigenous line of kings of Mariachi dynasty.

9. According to Allahabad pillar inscription which kingdom was mentioned as the frontier kingdoms of the Gupta Empire?
a) Kamarupa
b) Davaka
c) Both a and b
d) None of these

Davaka was later absorbed by Kamarupa, which grew into a large kingdom that spanned from Karatoya river to near present Sadiya and covered the entire Brahmaputra valley, North Bengal, parts of Bangladesh and, at times Purnea and parts of West Bengal.

10. The Kamarupa kingdom was ruled by which of the following dynasties?
a) Varmanas
b) Mlechchha dynasty
c) Kamarupa-Palas
d) All of the above


Click here to View Answer
Answer d) All of the above. The kingdom was ruled by three dynasties; the Varmanas (c. 350–650 CE), the Mlechchha dynasty (c.655–900 CE) and the Kamarupa-Palas (c. 900–1100 CE), from their capitals in present-day Guwahati (Pragjyotishpura), Tezpur (Haruppeswara) and North Gauhati (Durjaya) respectively. All three dynasties claimed descent from Narakasura.

11. Which dynasties were the ruler during medieval period?
a) Ahoms
b) Chutiya
c) Koch
d) All of the above


Click here to View Answer
Answer d) All of the above. The Ahoms, a Tai group, ruled Upper Assam. The Shans built their kingdom and consolidated their power in Eastern Assam with the modern town of Sibsagar as their capital.

The Chutiya rulers (1187–1673 AD), a Bodo-Kachari group by origin, held the regions on both the banks of Brahmaputra with its domain in the area eastwards from Vishwanath (north bank) and Buridihing (south bank), in in Upper Assam and in the state of Arunachal Pradesh.

The Koch, another Bodo-Kachari dynasty, established sovereignty in c. 1510 AD. The Koch kingdom in Western Assam and present North Bengal was at its zenith in the early reign of Nara Narayan (c. 1540–1587 AD). It split into two in c. 1581 AD, the western part as a Moghul vassal and the eastern as an Ahom satellite state.

12. Which one is the Capital of Assam?
a) Guwahati
b) Dhubri
c) Dispur
d) None of These

13. The First Anglo-Burmese War ended with which treaty?
a) Treaty of Yandabo
b) Treaty of Bengal
c) Treaty of jahunabad
d) None of these


Click here to View Answer
Answer a) Treaty of Yandabo. A reign of terror was unleashed by the Burmese on the Assamese people, who fled to neighbouring kingdoms and British-ruled Bengal. The Burmese reached the East India Company’s borders, and the First Anglo-Burmese War ensued in 1824. The war ended under the Treaty of Yandabo in 1826, with the Company taking control of Western Assam and installing Purandar Singha as king of Upper Assam in 1833. The arrangement lasted till 1838 and thereafter the British gradually annexed the entire region.


Click here to View Answer
Answer a) 1963. 1963 the Naga Hills district became the 16th state of India under the name of Nagaland. Part of Tuensang was added to Nagaland.


Click here to View Answer
Answer b) 1972. In 1970, in response to the demands of the Khasi, Jaintia and Garo people of the Meghalaya Plateau, the districts embracing the Khasi Hills, Jaintia Hills, and Garo Hills were formed into an autonomous state within Assam; in 1972 this became a separate state under the name of Meghalaya.

16. Which city of Assam has the largest dry fish market of Asia?
a) Guwahati
b) Jagiroad
c) Tangla
d) Tinisukia

17. Which of following North East Frontier Agency was separated from Assam and made union territories?
a) Arunachal Pradesh
b) Sikkim
c) Mizoram
d) Both a and c


Click here to View Answer
Answer d) both a and c. In 1972, Arunachal Pradesh (the North East Frontier Agency) and Mizoram (from the Mizo Hills in the south) were separated from Assam as union territories; both became states in 1986.

18. Which is the official language of Assam?
a) Hindi
b) Assamese
c) English
d) Bengali


Click here to View Answer
Answer a) 6. A significant geographical aspect of Assam is that it contains three of six physio-graphic divisions of India – The Northern Himalayas (Eastern Hills), The Northern Plains (Brahmaputra plain) and Deccan Plateau (Karbi Anglong). As the Brahmaputra flows in Assam the climate here is cold and there is rainfall most of the month.

20. What is the climate of Assam?
a) Tropical
b) Sub-tropical
c) Tropical Monsoon Rainforest Climate
d) cold


Click here to View Answer
Answer c) both a and b. Assam has wildlife sanctuaries, the most prominent of which are two UNESCO World Heritage sites the Kaziranga National Park, on the bank of the Brahmaputra River, and the Manas Wildlife Sanctuary, near the border with Bhutan. The Kaziranga is a refuge for the fast-disappearing Indian one-horned rhinoceros. The state is the last refuge for numerous other endangered and threatened species including the white-winged wood duck or deohanh, Bengal florican, black-breasted parrotbill, red-headed vulture, white-rumped vulture, greater adjutant, Jerdon’s babbler.

23. Assam has the largest population of which species in the world?
a) Wild water buffalo
b) Bengal florican
c) Black-breasted parrotbill
d) Red-headed vulture

24. Which of the following is a bird sanctuary?
a) Shalmara beel
b) Dibru-Soikhuwa
c) Chachoni-Merbil
d) Deepor beel


Click here to View Answer
Answer d) Deepor beel. Dipor Bil, also spelt Deepor Beel, is located to the south-west of Guwahati city, in Kamrup district of Assam, India It is a permanent freshwater lake, in a former channel of the Brahmaputra River, to the south of the main river. A Designated as Ramsar Site from 19 August 2002.


Click here to View Answer
Answer a) 1985. In 1954, the government of Assam passed the Assam (Rhinoceros) Bill, which imposed heavy penalties for rhinoceros poaching. Fourteen years later, in 1968, the state government passed the Assam National Park Act of 1968, declaring Kaziranga a designated national park. The 430 km2 (166 sq mi) park was given official status by the central government on 11 February 1974. In 1985, Kaziranga was declared a World Heritage Site by UNESCO for its unique natural environment.