DayTodayGK has prepared a detailed post on Agricultural seasons in India.

Agriculture in India dates back to Indus Valley Civilization Era and even before that in some parts of Southern India. Today, India ranks second worldwide in farm output.

The agricultural crop year in India is from July to June. 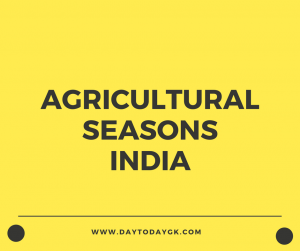 Radha Mohan Singh is the current Agriculture Minister of India.

Also Know About the Constituencies of Cabinet Ministers

(c) Zaid: Besides the kharif and rabi crops, there are certain crops which are being raised throughout the year due to artificial irrigation.

KNOW EVERYTHING ABOUT TYPES OF SOILS IN INDIA