Day Today GK has prepared a list of Important Thermal and Nuclear Power Plants in India.

It is very important to know about the name and location of Thermal and Nuclear power plants in India. Questions from this topic has appeared in many competitive exams in General Awareness Category.

What is a Thermal Power Plant?

A thermal power station is a power plant in which heat energy is converted to electric power. In most of the places in the world the turbine is steam-driven. Water is heated, turns into steam and spins a steam turbine which drives an electrical generator.

What is a Nuclear Power Plant? 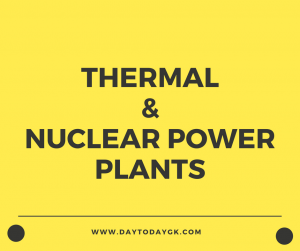