That India chose to confer its second-highest civilian award, the Padma Vibhushan, on veteran actor Dilip Kumar nearly two decades after Pakistan had presented him with its highest, the Nishan-e-Imtiaz, ought (should) only to underscore (draws the attention) the admiration people on either side of the fractious (irritable) border he crossed a few years before Partition have for him. Indeed, Mohammed Yusuf Khan, the name he was given, is only one of several film personalities born in what is now Pakistan to have found fortune in Bombay as it then was. There were many others, not just actors but producers, directors and so many others who made the western metropolis a focal point for sub-continental cinema. From his first foray (start) under the lights in the mid-1940s, Dilip Kumar’s bushy eyebrows, brooding (Brooding is used to describe an atmosphere or feeling that makes you feel anxious or slightly afraid) good looks, understated (If you describe a style, colour, or effect as understated, you mean that it is not obvious) presence and impeccable (perfect) dialogue delivery marked him out as an actor with a difference. Even as he came to dominate the film industry along with two others born on the other side of a border drawn in 1947, it was apparent (clear) he was different. Dev Anand was the dashing and romantic leading man while Raj Kapoor cast himself in a somewhat self-deprecating mould (typical attitude).

Dilip Kumar was typecast (play the character) as the “Tragedy King” but possessed skills sufficient to let him carry off other roles with aplomb (confidence). Not surprisingly, he was recognised regularly by film award juries. Unlike his two contemporaries though, he did not take to film-making, except for the odd foray for which he claimed no credit. While Raj Kapoor realised his days as a leading man were over with the ill-fated Mera Naam Joker, it took Dilip Kumar a little longer to accept that his make-up man couldn’t battle his age. In the mid-1970s after a series of flops, he took a break from cinema. He returned in the early 1980s as a character actor and turned out arguably one of his best performances, as a police officer in a tortured relationship with his son in Ramesh Sippy’s Shakti. 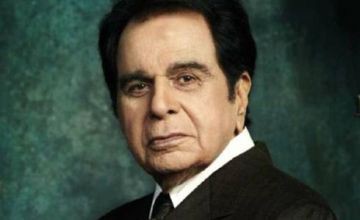 The Padma Vibhushan presented over the weekend follows several other national recognitions not the least of which were the Padma Bhushan and the Dadasaheb Phalke award. While these recognise his skill as a performer, Dilip Kumar also deserves praise for the genteel (A genteel person is respectable and well-mannered, and comes or seems to come from a high social class) manner in which he has conducted himself in public life and during a spell in Parliament. He has been unfailingly courteous (polite) , as indeed he was even in his forthright dismissal of the likes of Bal Thackeray who criticised his recognition by Pakistan. The man honoured at his home last Sunday is a mere shell of the titan that India and the world saw on the silver screen. But the grace of a bygone (past) era was evident even in this brief appearance before the camera.

READ PREVIOUS Editorial
MASAAN – There is Tussle between what has always been, and what can be