EPISODE – XXIII
TOPIC: MASAAN – There is Tussle between what has always been, and what can be
BLOG: Indian Express
WRITER: Shubhra Gupta
GENRE: Movie Review 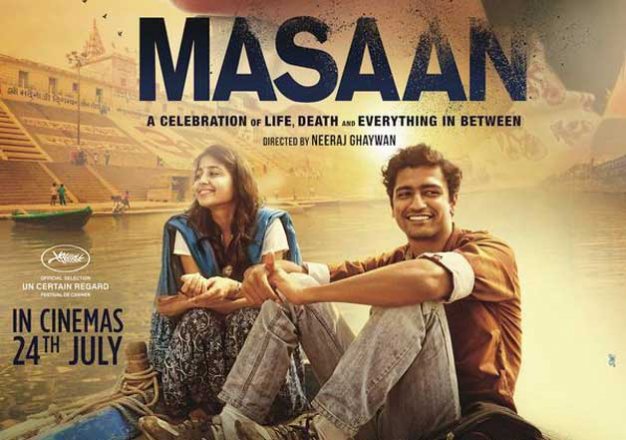 Why we Chose this Article?
There are so many reasons to select this article. We are listing some of them:
1. This movie was screened in the Un Certain Regard section at the 2015 Cannes Film Festival winning two awards.
2. Top Notch English used in this review
3. It shows you the aspect of life and death.
4. The Truth underneath the stereotype nature of us Indians reveals here.
So Read It, Enjoy It, Note down it and don’t forget to tell us about this.

Souls are said to be liberated (If you describe someone as liberated, you mean that they do not accept their society’s traditional values or restrictions on behaviour.) in Kashi; and ‘masaan’ (the colloquial (Colloquial words and phrases are informal and are used mainly in conversation.)local word for ‘shamshaan’) perfectly captures the unique character of a town which has been wrestling with life and death for centuries. Neeraj Ghaywan’s strikingly assured, powerful debut feature conjures (If you conjure something out of nothing, you make it appear as if by magic.) up a place which we rarely see in our movies: a place not limned (highlight (something) with a bright colour or light.) or air-brushed, but presented as it is, its beauty and ugliness for us to savour in equal measure.

‘Masaan’s Varanasi is not your Lonely Planet’s touristy, tripping-on-stuffed-chillums, come-hang-it-all-out ‘holy Indian town’, which continues to lure (entice) penniless (Someone who is penniless has hardly any money at all.) backpackers (A backpacker is a person who goes travelling with a backpack.) and ‘gora’ salvation-seekers (The salvation of someone or something is the act of saving them from harm, destruction, or an unpleasant situation.). This is a town lived in by its residents, a ‘chota sheher’ trembling on the cusp (If you say that someone or something is on the cusp, you mean they are between two states, or are about to be in a particular state.) of many conflicting elements: the mendacity (Mendacity is lying, rather than telling the truth. ) of the ‘pandas’ who feed off the dead, the hard, hard lifework of the ‘doms’—the men and the boys—who pile up and burn the bodies, and the younger generation trying to stumble (If you stumble, you put your foot down awkwardly while you are walking or running and nearly fall over.) past age-old constrictions (restriction) of caste and class and gender and sex.

Is there ever an escape? Or is life itself an eternal trap?

The characters we meet exemplify this push-pull of the old and new, the ancient and the modern, and how technology has brought about cataclysmic (A cataclysmic event is one that changes a situation or society very greatly, especially in an unpleasant way. (FORMAL)) changes. Motherless Devi Pathak (Richa Chadha) is poised in flight mode, whether through a liaison (Liaison is co-operation and the exchange of information between different organizations or between different sections of an organization.) with a boy she’s attracted to, or via a temporary stop-over at a ‘railways ki naukri’. Her father (Sanjay Mishra) who operates a little kiosk (A kiosk is a small building or structure from which people can buy things such as sandwiches or newspapers through an open window.) at the ‘ghats’, is a Sanskrit ‘vidwaan’ and wise to the ways of his ‘sangi-saathis’, but is clueless how to act when Devi is ensnared (If you ensnare someone, you gain power over them, especially by using dishonest or deceitful methods. = फुसलाना) in a scandal, and threatened by a greedy cop (Tiwari).

Engineering student Deepak (Vicky Kaushal) is also searching for a way out of his Dom lineage (वंश), and is also in the throes of first love. Pretty-perky (If someone is perky, they are cheerful and lively.) Shaalu (Tripathi) loves Hindi-Urdu poetry, and recites lines which speak to him even if he is unaware of their history. You fear that the discrepancy (inconsistency) in their station could act as a deal-breaker to their winsome romance. ‘Ladki upper caste hai dost, jyaada sentiyaayie mat’: this line, delivered in perfect Banarasi ‘leheja’ by Deepak’s friend, says it all. Or will they both learn to adjust?

The film, playing off Varun Grover’s sharply-observed script, gives us astute (If you describe someone as astute, you think they show an understanding of behaviour and situations, and are skilful at using this knowledge to their own advantage.) vignettes (A vignette is a short description, picture, or piece of acting which expresses very clearly and neatly the typical characteristics of the thing that it represents. ) of what it can be like to love and long in these Facebook-friends-request-mediated times. Deepak and Shaalu come together with the help of an online social network; a computer coaching center connects Devi and her boyfriend. They would never be able to meet otherwise, their spheres being so apart.

At the heart of the film is the tussle between what has always been, and what can be. No one can see the future, but it is there, stretching right in front of the conflicted Devi and the dealing-with-heartbreak-and-loss Deepak. Which makes ‘Masaan’, for all its underlying grimness, a film about hope and redemption (चतुर), underlined by the fine writing, both in the departments of script and lyrics: ‘tu kisi rail si guzarti hai, main kisi pul sa thartharata hoon’ is deeply philosophical, sensuous and spiritual at the same time. And an apt metaphor for the film: a river runs through it, so does a bridge, and both bring people in, and take them away. “Aadmi aata hai, jaata hai. Shareer nashwar hai, aatma amar hai” (the body dies, but the soul lives forever): this is the lesson that Deepak internalises (If you internalize something such as a belief or a set of values, you make it become part of your attitude or way of thinking. ), and again it is apt that it comes to Vicky Kaushal, the boy who becomes man so movingly, and who is the find of the film.

A couple of minor quibbles (When people quibble over a small matter, they argue about it even though it is not important.). Chadha channels the feeling-suffocated-in-a-small-town-and-thinking really well, but you wish she was given a tad (You can use a tad in expressions such as a tad big or a tad small when you mean that it is slightly too big or slightly too small.) more variation in her playing of the character. She breaks out in a few moments with the terrific Tripathi, who, in a cameo, brings to sparkling life a rooted-in-his-milieu (Your milieu is the group of people or activities that you live among or are familiar with.), stuck-in-the-groove ‘railway employee’. Mishra comes off too familiar. And there are a couple of plot contrivances  (If you describe something as a contrivance, you disapprove of it because it is unnecessary and artificial.)that you can see coming from afar.

But these do not take away from the strength of ‘Masaan’, which makes the connection between the constant cycles of life and death, and the pain of moving away and moving on, so effectively. The last time I saw the heart-breaking ‘taandav’ of the last rites– the ‘kriya-karam’– at the Banaras ghats, was in Rajesh S Jhala’s ‘The Children Of The Pyre’. Ghaywan catches it with empathy (Empathy is the ability to share another person’s feelings and emotions as if they were your own.).

The film also brings back many fading influences from a time when Hindi cinema knew how to do its job effectively. ‘Masaan’ is imbued (infuse) with a sense of place and time, poetry and lyricism, and it captures the essence of Banaras, constant-yet-changeable, with felicity and feeling. It also announces the arrival of new talents in its writer and director: Grover’s story is eminently worth telling, and Ghaywan tells it beautifully.