We know that World Leprosy Day is observed internationally on January 30, the Martyrdom Day of Mahatma Gandhi Ji, in order to re-memorize his selfless efforts and care for the people affected by the infectious disease leprosy. Also the leprosy problem of India gained the attention of Mother Teresa and her nuns. In September, 1957 Mother Teresa started her mobile clinics for the treatment of lepers. She soon founded a leprosarium village outside Calcutta city limits.

Leprosy, also known as Hansen’s disease (HD), is a chronic infection caused by the bacteria Mycobacterium leprae and Mycobacterium lepromatosis.  Leprosy causes severe, disfiguring skin sores and nerve damage in the arms and legs. Outbreaks of leprosy have affected, and panicked, people on every continent. 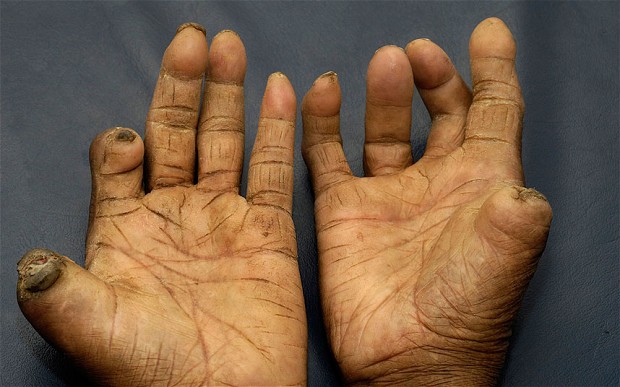 Gerhard Henrik Armauer Hansen was a Norwegian physician, remembered for his identification of the bacterium Mycobacterium leprae in 1873 as the causative agent of leprosy.

Leprosy is spread between people. It is believed to occur through a cough or contact with fluid from the nose of an infected person. It is transmitted by prolonged contact, usually through aerosols containing the nasal secretions, or droplets from these fluids. However, 95% of people are naturally immune to the infection. It can also be transmitted from mother to child via the placenta.

What Are the Symptoms of Leprosy?

Leprosy primarily affects the skin and the nerves outside the brain and spinal cord, called the peripheral nerves. It may also strike the eyes and the thin tissue lining the inside of the nose.

The main symptom of leprosy is disfiguring skin sores, lumps, or bumps that do not go away after several weeks or months. The skin sores are pale-colored.

Because the bacterium multiplies very slowly, the signs and symptoms of leprosy may not develop until much later after exposure to M. leprae (ranging from several weeks to 20 years or more). 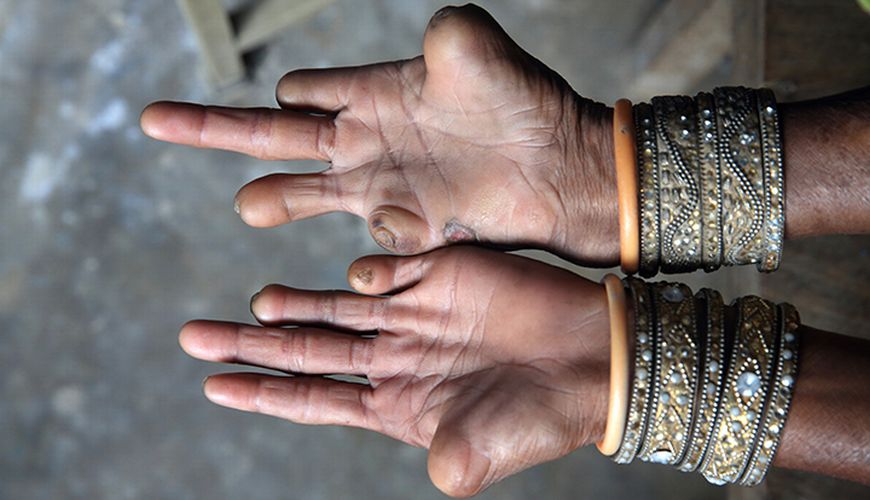 Though humans are the major reservoir and host for infection with M. leprae, other animals such as armadillos, chimpanzees, and mangabey monkeys, and macaques also serve as reservoirs of infection.

The time between contact with the bacteria and the appearance of symptoms is called the incubation period. Leprosy’s long incubation period makes it very difficult for doctors to determine when and where a person with leprosy got infected.

What are the different forms of Leprosy?

A mild, less severe form of leprosy. People with this type have only one or a few patches of flat, pale-colored skin (paucibacillary leprosy).

A more severe form of the disease. It has widespread skin bumps and rashes (multibacillary leprosy), numbness, and muscle weakness.

How is Leprosy Treated?

Avoid long-term contact with infected people till they have received a single monthly dose of multi-drug treatment.

India is considered the point of origin of leprosy with skeletal evidence of the disease dating to 2000 B.C. The disease is thought to have spread through trade and war to other parts of Asia, the Middle East, North Africa, and later Europe and the Americas. In ancient Indian society, individuals suffering from leprosy were alienated because the disease was chronic, contagious, resulted in disfigurement, had no cure at the time, and was associated with sin.

Leprosy currently affects approximately a quarter of a million people throughout the world, with majority of these cases being reported from India.

India is currently running one of the largest leprosy eradication program in the world, the National Leprosy Eradication Program (NLEP).