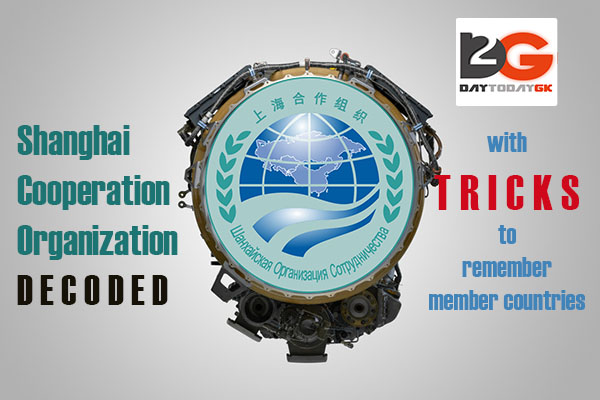 AIM : The body aims to improve cooperation between its six members, and deal with new challenges and threats. Cooperation among SCO members covers a wide range of areas including security, economy, transportation, culture, disaster relief, and law enforcement.

WORKING LANGUAGE : The official working languages of the Shanghai Cooperation Organization are Chinese and Russian.

The SCO has two permanent headquarters, the secretariat in Beijing and the Regional Anti-Terrorist Structure (RATS) in Tashkent, the Uzbek capital.

Trick : China is a workshop of world where there are workshops there will be TRUCK to carry goods. Hence member of shanghai cooperation organization are

Trick : LIC OBSERVE the time line of your life and when necessary it gives you help. But first you need LIC’s BIMA yojna.

Trick : One can not ignore the STANCE (position) of Dialogue Partners Countries in SCO.

Western media observers believe that one of the original purposes of the SCO was to serve as a counterbalance to NATO and in particular to avoid conflicts that would allow the United States to intervene in areas bordering both Russia and China. Some experts say the organization has emerged as an anti-U.S. bulwark in Central Asia, others believe frictions among its members effectively preclude a strong, unified SCO.

If you have any trick that you want to share with us. Please mail us at : rahulday2daygk@gmail.com