Chennai is recovering from a second spell of debilitating (If you are debilitated by something such as an illness, it causes your body or mind to become gradually weaker. (FORMAL)) rains. All of last week, the city saw heavy rains with even heavier winds. Entire floors of houses were submerged and water even threatened (If you feel threatened, you feel as if someone is trying to harm you.) to enter higher floors. Boats were let out, and the army and navy could be seen hard at work, rescuing stranded citizens along with volunteers who haven’t so much as slept a wink in the last few days. The Adyar river, which had only been famous for being parched (If something, especially the ground or a plant, is parched, it is very dry, because there has been no rain.) and smelly, now flows with the strength of the Amazon. Bridges have fallen, roads have collapsed and water has pervaded(If something pervades a place or thing, it is a noticeable feature throughout it. (FORMAL))the city in ways that one only encounters in apocalypse (The apocalypse is the total destruction and end of the world.) movies.

According to weather reports, and satellite images of the white dastardly(If you describe an action as dastardly, you mean it is wicked and intended to hurt someone.)  patches of cloud that are now moving away from the state, the city seems to be — fingers crossed — safe from more heavy rainfall. The sun is out, and people are now on the road, trying to get back to life as it was. Thanks to technology, we know exactly how long the weather’s going to be terrible, and when it’ll get better. One can’t help but wonder though, what did people do before science evolved this far? Ten years ago, when a similar kind of monsoon hit the city, I asked my grandmother this exact question. Her answer was simple — “We prayed”.

Ancient civilisations across the globe worshipped the elements in one way or the other. The Greeks, for example, had assigned a god for almost every cause, even for merrymaking and wine (Dionysus was his name, in case you’re curious). But the chief god, Zeus, controlled the skies and the storms, and was often pictured with a thunderbolt. Farther (far) north in Europe, Norse (Norse is the language that was spoken in Scandinavian countries in medieval times.)  mythology had Thor, the god of thunder, lightning and storms. Thor was portrayed to be strong and mighty, and carried a massive hammer known as the Mjǫllnir. Thor is perhaps the most popular god in Norse mythology, to the point where he has his own comic book series now, and is also associated with strength, the protection of mankind, and fertility. 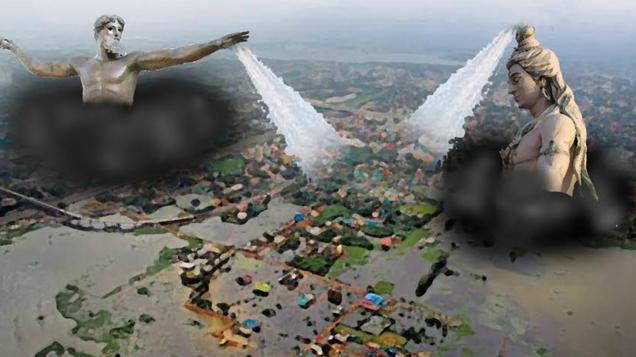 Here at home, we have Indra. Indra, apart from being the king of the Devas, is also the god of the skies, wields (If you wield a weapon, tool, or piece of equipment, you carry and use it.)  a thunderbolt called Vajra and rides Airavata, the glorious white elephant. Indra, Thor and Zeus, are proof of two things — that our ancients across the world weren’t too creative with their gods, and that they all feared the destructive powers that rains and storms possessed, to the point where they decided to not only deify (If someone is deified, they are considered to be a god or are regarded with very great respect.)  them, but also make them the most important among the other gods. It soon became imperative for civilisations to do their best to appease (If you try to appease someone, you try to stop them from being angry by giving them what they want.) these gods as well, for if they weren’t happy, they would take their anger out on the people of earth.

Perhaps the most famous story in Indian Mythology involving weather gods losing their temper with the people of the earth is the episode of ‘Govardhana Giridhara’ — the cowherd who lifted the mountain. Once, when the people of Vrindavan were trying to arrange a sacrifice to appease Indra, they came to Krishna for help. Krishna, instead of helping them out, convinced them that Indra didn’t need sacrifice to be appeased. As far as Krishna was concerned, Indra didn’t need appeasement at all. And so, the villagers of Vrindavan, placing all their faith in Krishna, decided to not proceed with the sacrifice. Indra, obviously, was not too happy about this development, and decided that their impudence (If you describe someone as impudent, you mean they are rude or disrespectful) must be taught a lesson.

The blue skies turned black as Indra unleashed both his anger and his thunderbolt, and Vrindavan saw a storm the likes it had never seen before. Rain pummelled (If you pummel someone or something, you hit them many times using your fists.) the land incessantly, destroying everything in its wake as the terror-struck villagers ran to Krishna. Save us! they cried.

Krishna, who was by now tired of Indra’s antics, made the villagers collect their belongings and their cows and follow him to a large mountain near the village. Once they were there, Krishna lifted this giant mountain, with his little finger no less, instantly making it a massive umbrella for the people around him. When Indra saw what was happening, he was incensed, and made the storm more severe. The winds howled, thunder roared, and the rains lashed, but Krishna stood, smiling serenely as he held the mountain with his finger.

Indra exhausted all his weapons, and them himself, before he realised that it was no ordinary cowherd who was lifting this mountain, but someone who was higher up in the divine food chain. He stopped the storm, and went down to apologise, humbled. 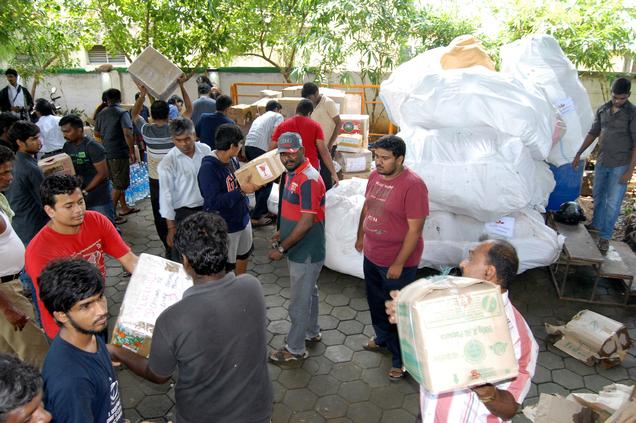 I believe that this episode, which is usually recalled to indicate the shift in Hinduism from worshipping smaller gods (Devas), to the prominent (well-known) ones (Shiva & Vishnu), is relevant to the rains that have hit Chennai over the last week. While mythology tells you that terrible storms occurred because the weather gods were taking their temper out on the people of earth, science will tell you that certain severe storms are actually the product of a larger environmental problem which came into existence because of man. We have plundered the earth, destroyed forests, polluted seas, wiped out entire species of animals, changed the composition of the air we breathe, manipulated natural drainage systems, all because we could. Is it any wonder that the gods are angry?

Having said that, the volunteer efforts across the city have been phenomenal. People are working day and night, without sleep to get food and water across to all those who have been affected. There are restaurants preparing food in the thousands of kilos, free of cost, to be distributed. Temples, mosques churches, and common people have opened their gates to provide shelter. The kindness that one has seen the last week has been overwhelming, and the city, despite being battered (If someone is battered, they are regularly hit and badly hurt by a member of their family or by their partner.) and bruised, remains optimistic. Maybe, we have lifted our own mountain.