Prime Minister Visited Countries in 2017 is one of the major topics in Current Affairs / General Awareness Category. 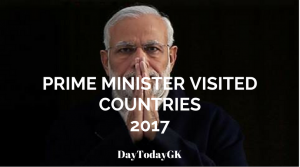 President – The President of the Government (Spanish: Presidente del Gobierno), formally known by English-speaking nations and formally translated by the European Commission Directorate-General in English as Prime Minister, is the head of the government of Spain.

Purpose and Notes – At the invitation of President of Spain Mariano Rajoy, the Prime Minister of India Narendra Modi paid an official visit to Spain on 30 – 31 May 2017. Both leaders acknowledged that India and Spain share a strong commitment to principles and values of democracy, freedom, rule of law, respect for human rights and territorial integrity of States. They also recognized their common responsibility towards ensuring international peace and security, promotion of free trade, open and inclusive international order and environmental sustainability.

Purpose and Notes – PM Modi was visited the country primarily to attend the biggest Buddhist festival ‘Vesak Day’ as its chief guest. His visit schedule includes a visit to Kandy where interaction with a group of Tamil people in the upcountry region, seen as an effort to reach out to the community. India and Sri Lanka are in talks to jointly operate oil tanks at the strategic Trincomalee port. At least 73 of the 99 storage tanks in Trincomalee are to be managed under a new equity arrangement between India and Sri Lanka.

Purpose and Notes – The fourth Inter-Governmental Consultations [IGC] between India and Germany were held in Berlin. The Prime Minister of India Shri Narendra Modi and the German Federal Chancellor Dr. Angela Merkel agreed to further strengthen the Strategic Partnership between India and Germany by deepening cooperation on foreign policy and security issues as well as on sustainable development and enhanced trade and investment ties.

Purpose and Notes – The leaders of India and Russia, in the year that marks the 70th anniversary of the establishment of diplomatic relations between our countries, note that the Indian-Russian special and privileged strategic partnership is a unique relationship of mutual trust between two great powers. Our relationship covers all areas of cooperation, including in the spheres of political relations, security, trade and economy, military and technical field, energy, scientific, cultural and humanitarian exchanges, and foreign policy, and helps promote national interests of both countries, and contributes to the establishment of a more peaceful and just world order.

Purpose and Notes – The visit should be seen beyond the common resolve to fight terrorism and withstand climate change by protecting earth and its natural resources as per the Paris Agreement, to which almost the major countries are committed, save the United States under the Trump administration. This is Modi’s third visit to France in the last three years. In 2015, France was the first European country that Modi visited as prime minister. And this time, it was perhaps necessitated by his desire to meet the newly-elected French president Emmanuel Macron so that the ever-improving bilateral ties under his predecessors, including Francoise Hollande, remained on track.

Purpose and Notes – SCO summit, Prime Minister invited Kazakhstan to become member of the International Solar Alliance, to which he very positively responded. One of the important achievements of this progress is that Kazakhstan is now number one supplier of Uranium to India. Following the visit we have already received two shipments of Uranium from Kazakhstan in the last two years. Both the leaders agreed to continue to maintain this partnership in this important field. They also discussed cooperation in Hydrocarbons. Our exploration work in the Satpayev block is going satisfactorily. Narendra Modi Also Meet to the  Chinese president Xi Jinping on the sidelines of the summit and Pakistan prime minister Nawaz Sharif who is also in Astana for the summit

Purpose and Notes – The PM’s Portugal visit is the second visit by an Indian Prime Minister to Portugal. Earlier, former Prime Minister Atal Bihar Vajpayee attended a European Union meeting in Lisbon in 2000. India and Portugal are strong partners in the international arena. Prime Minister Narendra Modi said we thank Portugal for your consistently support for India’s permanent membership of the UN Security Council, as well as of the multilateral export control regimes. We are also determined to deepen our cooperation against terrorism and violent extremism.

Prime Minister – The United States of America does not have a prime minister, since it does not follow a parliamentary government unlike other countries (e.g. England, Australia, and India). The head of state is the President of the United States (sometimes abbreviated as POTUS), and it is currently Donald Trump

Purpose and Notes – Bilateral talk on Terrorism, In marking 70 years of diplomatic relations between India and the United States, the leaders resolved to expand and deepen the strategic partnership between the countries and advance common objectives. Above all, these objectives include combating terrorist threats, promoting stability across the Indo-Pacific region, increasing free and fair trade, and strengthening energy linkages.

Purpose and Notes – Narendra Modi has become the first Indian Prime Minister to visit Israel, arriving in Tel Aviv as part of a three-day visit to mark 25 years of diplomatic relations between the two nations. Modi’s visit also deepened the two-way commercial links, with the signing by Indian and Israeli companies of a dozen investment agreements worth $4.3 billion at the maiden CEO Forum meeting in Tel Aviv. There was also a consensus that the current trade volume has the potential to reach $20 billion in the next five years. Modi, who became the first Indian prime minister to visit the Jewish nation, signed seven agreements to boost bilateral cooperation in key areas like science and technology, water, research and space.

President – The Minister-President of the Netherlands (Dutch: Minister-president van Nederland), commonly referred to in English as the Prime Minister, is the head of the executive arm of the Dutch government and the chairman of the Council of Ministers of the Netherlands.