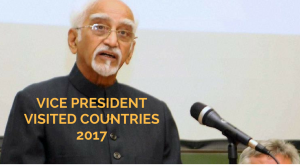 Purpose and Notes – India and Rwanda have inked three agreements in the fields of innovation, aviation and visa requirements to boost bilateral relations. Vice President is the first Indian leader to officially visit Rwanda. He launched India-Rwanda innovation growth programme.

Purpose and Notes – This was the first high-level bilateral visit to Uganda from India since 1997. The vice president, along with wife Salma, was travelling with Union minister of state for social justice and empowerment Vijay Sampla, four MPs—Kanimozhi, Ranvijay Singh Judev, Ranee Narah and P K Biju, and senior officials. After the talks, India and Uganda decided to expand cooperation in the field of energy sector and training of personnel for space programme and peaceful use of atomic energy, even as the resource-rich East African country pitched for Indian companies to manufacture automobiles locally to discourage import of cars.

Purpose and Notes – Vice President Hamid Ansari attended the Summit of the Indian Ocean Rim Association (IORA) on March 7 in Jakarta, Indonesia where the 21-nation grouping discussed way to strengthen maritime cooperation and fight against violent extremism.  The summit, with the theme of ‘Strengthening Maritime Cooperation for a Peaceful, Stable and Prosperous Indian Ocean’, preceded by a meeting of the Committee of Senior Officials on March 5 and a meeting of the Council of Ministers on March 6.

Purpose and Notes – Vice President Ansari held talks with the top leadership of Armenia and oversaw the signing of three agreements in the field of cultural co-operation, youth affairs and peaceful use of space. The Vice President said that Armenia has old cultural links with India. He further said that it is a friendly country to India and India helped them in capacity building. The Armenian community in Kolkata had strong cultural presence, including the famous Armenian Church, he added. He further said that his visit would build on the excellent political relations and good-will the two countries shared.

Note: President did not visit any country in the first half of the year 2017