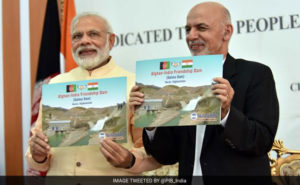 The project has been executed and implemented by WAPCOS Ltd, a government of India undertaking under ministry of Water Resources, River Development and Ganga Rejuvenation. Over 1,500 Indian and Afghan engineers were involved in construction of the dam for several years in difficult condition.  Afghanistan is Modi’s first stop as part of his five- nation tour which will also take him to Qatar, Switzerland, the US and Mexico.

In his address at the inauguration ceremony, Ghani welcomed Modi to his “second home”, Afghanistan, and said a “long standing dream” of the country has been realised after 30 years with help from India.

During his 25 minute-long speech after inaugurating the dam, Modi also invoked Chisht-born Sufi saint Khwaja Moinuddin Chishti who settled down in Ajmer and is venerated by thousands of people visiting his shrine. At the close of the speech, the Prime Minister also wished the people of Afghanistan and all Muslims across the world for the Holy Month of Ramzan.