The Indian Parliament comprises two Houses – Lok Sabha (House of the People), and Rajya Sabha, (Council of the States), and the President of India. Parliament has four primary functions: to make laws, to sanction government expenditure, to oversee the work of the government, and to represent the interests of the people.

Hindi term for Parliament is Sansad.  The Parliament includes the President and the two Houses – the Council of States (Rajya Sabha) and the House of the People (Lok Sabha). This kind of system, with two Houses, is called a bicameral legislature. 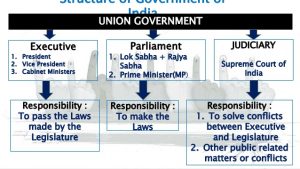 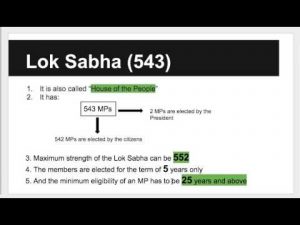 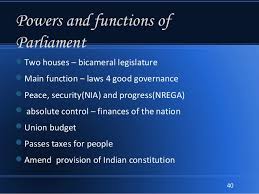 The broad functions of Parliament can be described as follows:

What constitutes the Government of India?

The President is the formal, constitutional head of the Republic of India. After the Lok Sabha elections, the President invites the leader of the party or parties with the majority of votes in the Lok Sabha to form the Government.

The role of the President of India with regard to Parliament

The President is the constitutional head of Republic of India, directly elected by an electoral college that includes elected members of both Houses of Parliament and the elected members of the Legislative Assemblies of the States.

The special powers of Rajya Sabha:

There are, however, certain disqualifications for becoming a member. A person would be ineligible for being a member of either House of Parliament if the person:

Besides, certain laws enumerate further disqualifications. If a person has been convicted, among other things, for promoting enmity between different groups or convicted for the offence of bribery or has been punished for preaching and practising social crimes such as untouchability, dowry, or sati, then he is disqualified from being chosen as a member.

There are also disqualifications on the grounds that the person is convicted for an offence and sentenced to imprisonment; and for a government servant dismissed for corruption or for disloyalty to the State.