Nihal Bitla (15), a Mumbai teenager who had been suffering from a rare genetic disease that causes the body to age 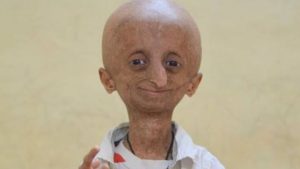 eight times faster than normal has died. He was  the face of India’s awareness campaign against progeria. Bitla made headlines while trying to locate 60 other Indian progeria sufferers to participate in a clinical trial in Boston with him. He ran an active social media campaign to raise awareness about the disease. Most recently he fronted an awareness campaign called #HatsOnForProgeria, where he appeared with a group of supporters at Mumbai’s iconic Chhatrapati Shivaji railway station. He had also appeared at a #RunForProgeria event in the southern city of Bangalore.

Bitla shot into the limelight after he met Bollywood actor Aamir Khan in December after the Facebook page “Humans of Bombay” highlighted his story and the fact that he was a “super fan” of the star. He died in hospital on Tuesday in the southern state of Telangana, where he had gone to attend a wedding. Indian social media is full of tributes to Bitla, with many calling him a “fighter” and an “inspiration”.

May His Soul Rest in Peace!!!