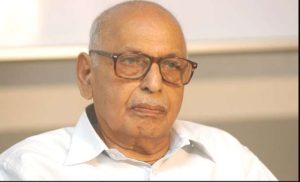 Mathrubhumi former editor K K Sreedharan Nair passed away . He was 86. The end came at a private hospital in Kochi.
After an illustrious career spanning over six decades, Sreedharan Nair had retired from service on June 8, 2015.