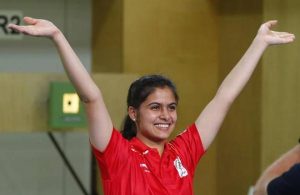 Manu Bhaker missed a medal by 0.1 point but captured the more important Olympic quota place in women’s air pistol in the shooting World Cup. Despite shooting a 10.3, the best among the four shooters at the halfway stage of the final, Manu was overtaken by eventual gold medallist Anna Korakaki of Greece.

The 17-year-old Manu had by then ensured her Olympic quota as both Korakaki and bronze medallist Kim Minjung of Korea had already secured their quota. Silver medallist, Chinese Qian Wei secured the other quota.

Earlier, Sunidhi Chauhan shot 1175 in women’s rifle 3-position event and missed the final on lesser inner-10s. Yulia Zykova of Russia, who had also shot 1175, went on to win the gold, 0.2 point ahead of Seonaid McIntosh of Britain.

India continues to stay on top of the medals table ahead of China. In men’s 25-metre rapid fire pistol, Arpit Goel (577), Adarsh Singh (571) and Anish Bhanwala (567) fared below their best and did not stand a chance to make the final.