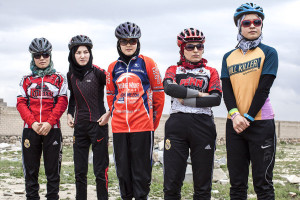 Afghanistan’s National Women’s Cycling Team has been nominated for the Nobel Peace Prize by members of the Italian parliament. The team has used the bicycle as a vehicle for social justice, enduring violence and social stigma. In 2013, it became the first Afghan women’s team to compete on the international stage, at the Asian Cycling Championships in Delhi.

Afghanistan had a women’s team as early as 1986, but that program was scuttled during Soviet and subsequent Taliban control of the country. It was reborn in 2011 when Abdul Sediq, coach of the Afghan men’s national team, founded a team around his daughter, Marjan “Mariam” Sedequi. The team now has about a dozen women, who ride in pants, loose-fitting shirts, and hijabs beneath helmets to avoid attracting additional unwanted attention.

As these women bring national pride to themselves and to a war-torn country, they are opening the door to allow girls to ride bicycles for transportation.