Do You Know Who is a Wordsmith? 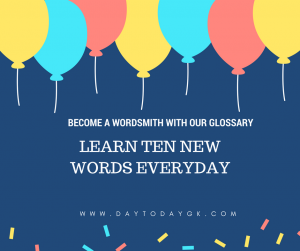 1)Scoff:Noun,Verb
Meaning: an expression of scornful derision , speak to someone or about something in a scornfully derisive or mocking way.उपहास
Sentence: I think most people would scoff at the idea, and rightly so.

3)Fanaticism:Noun
Meaning: the quality of being fanatical.अंधाधुंधता
Sentence: the dangers of religious fanaticism

4)Intransigence:Noun
Meaning: refusal to change one’s views or to agree about something.कट्टरता
Sentence: In the face of government intransigence, he resigned in disgust

5)Bourgeois:Adjective,Noun
Meaning: of or characteristic of the middle class, a bourgeois person.पूंजीपति
Sentence: a self-confessed and proud bourgeois

6)Espionage:Noun
Meaning: the practice of spying or of using spies, typically by governments to obtain political and military information.जासूसी
Sentence: Balzac pumped him for information on organised crime and political espionage.

9)Perquisite:Noun
Meaning: a thing regarded as a special right or privilege enjoyed as a result of one’s position.रिआयत
Sentence: She asked him if he missed the perquisites of being Speaker of the House.

10)Untoward:Adjective
Meaning: unexpected and inappropriate or inconvenient.अभागा
Sentence: both tried to behave as if nothing untoward had happened