Home » General Knowledge » List of Important Awards and their Fields 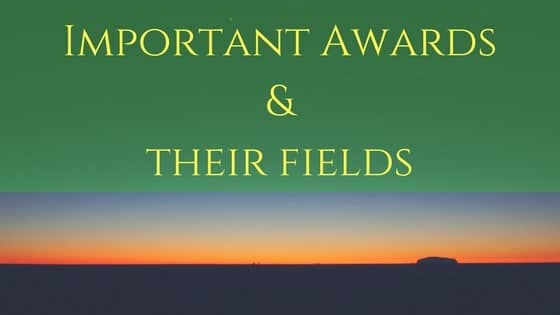 Here, we providing you a list of some IMPORTANT AWARDS AND THEIR FIELDS which are important for your upcoming competitive exams. We hope it will help your exams.

IMPORTANT AWARDS AND THEIR FIELDS

1. Nobel Prize
– The most coveted international award was named after Alfred Bernard Nobel, the inventor of dynamite.
– The award is given every year on December 10th, which marks the death anniversary of Alfred Bernard Nobel.
– Pioneering achievements in the fields of Physics, Chemistry, Medicine, Peace, Literature, and Economics.

2. Magsaysay Awards
– Instituted in 1957 and named after Ramon Magsaysay, the former President of Philippines.
– This award is given annually on August 31.
– Award is given for outstanding contributions to public service, community leadership, journalism, literature and creative arts and international understanding.

3. Oscar Awards
– Instituted in 1929
– Conferred annually by the Academy of Motion Pictures in USA.
– The first Indian to get an Oscar was Bhanu Athaiya for the movie ‘Gandhi’.

4. Pulitzer Prize
– Instituted in 1970 and named after the US Publisher Joseph Pulitzer.
– Conferred annually in the USA.
– For accomplishments in journalism, literature and music.

6. Jawaharlal Nehru Award for International Understanding
– Instituted in 1965 by the Government of India.
– Given annually to persons for outstanding contributions to international understanding and goodwill among the people of the world.

7. Mahatma Gandhi Peace Prize
– Instituted in 1995 by Government of India.
– It is presented for international peace on the lines of Nobel Prize.

8. Bharat Ratna
– Highest civilian award of India.
– Instituted in 1954.
– Presented for exceptional public service and rarest achievements in the field of art, literature and science
– First recipient was Dr. Radhakrishnan.

10. Bhartiya Jnanpeeth Awards
– Instituted in 1965.
– Given for distinguished works in any recognized language by a scholar.

11. Sahitya Akademy Awards
– Instituted in 1965.
– Given for any exclusive writing in any of the 22 languages including English literature.

12. Arjuna Awards
– Instituted in 1961.
– Given by Sports Ministry, Government of India.
– These are given for the special achievements in different types of sports.

13. Dronacharya Awards
– Instituted in 1985.
– Given by Sports Ministry, Government of India.
– These are given to sports coaches.

14. Rajiv Gandhi Khel Ratna
– It was instituted in 1962.
– Presented for commendable display by the players.

16. Dhanvantri Award
– These awards are given for the extra ordinary performance in medical sciences.

17. R.D. Birla Award
– Given in the field of medical sciences.

18. Vyas Samman
– Instituted in 1992 by the K.K. Birla Foundation.
– For outstanding contribution to Hindi literature.

19. Shanti Swarup Bhatnagar Awards
– Given to the Indian scientists for their exceptional performance.

21. UN Human Rights Award
– Presented by UN for personal contribution for the cause of human rights.
– It is presented every sixth year.

22. Man Booker Prize
– Highest literary award to authors of British, Irish and Commonwealth countries.
– Instituted in 1968 by the Booker Company and the British Publishers Association along the lines of Pulitzer Prize of US.
– Renamed as Man Booker Prize, as the sponsorship has been taken over by the Man Group, an international stockbroker.

23. World Food Prize
– Presented by Food and Agriculture Organization (FAO).
– For the cause of agriculture and food development.

24. Right Livelihood Award
– Instituted in 1980 by the Right Livelihood Society, London.
– Known as alternate Nobel Award.
– To promote and contribute in the fields of environment and social justice.

25. Saraswati Samman
– Instituted in 1991 by the K.K. Birla Foundation.
– Given for any distinguished literary work made during last 10 years in any of the Indian language.

– Important Awards and their Fields