The first question is what is meant by a ‘smart city’. The answer is, there is no universally accepted definition of a smart city. It means different things to different people. The conceptualisation of Smart City, therefore, varies from city to city and country to country, depending on the level of development, willingness to change and reform, resources and aspirations of the city residents. A smart city would have a different connotation in India than, say, Europe. Even in India, there is no one way of defining a smart city. 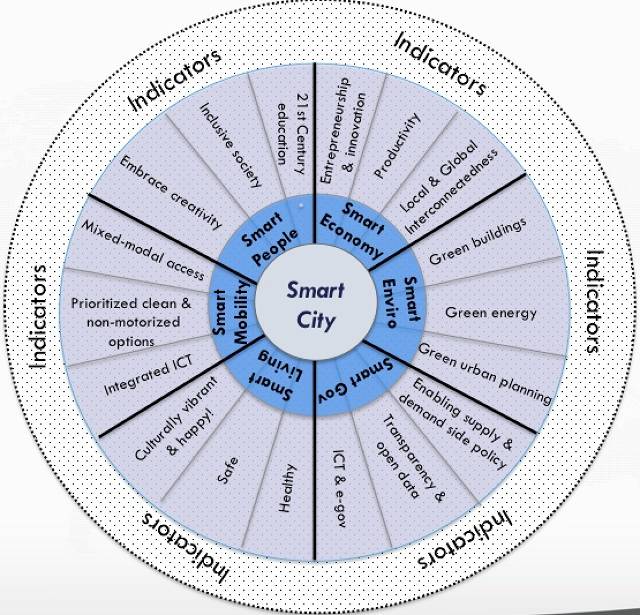 Some definitional boundaries are required to guide cities in the Mission. In the imagination of any city dweller in India, the picture of a smart city contains a wish list of infrastructure and services that describes his or her level of aspiration. To provide for the aspirations and needs of the citizens, urban planners ideally aim at developing the entire urban eco-system, which is represented by the four pillars of comprehensive development-institutional, physical, social and economic infrastructure. This can be a long term goal and cities can work towards developing such comprehensive infrastructure incrementally, adding on layers of ‘smartness’.

In the approach of the Smart Cities Mission, the objective is to promote cities that provide core infrastructure and give a decent quality of life to its citizens, a clean and sustainable environment and application of ‘Smart’ Solutions. The focus is on sustainable and inclusive development and the idea is to look at compact areas, create a replicable model which will act like a light house to other aspiring cities. The Smart Cities Mission of the Government is a bold, new initiative. It is meant to set examples that can be replicated both within and outside the Smart City, catalysing the creation of similar Smart Cities in various regions and parts of the country.

The core infrastructure elements in a smart city would include:

(i) Information, communication, and technology (ICT)-enabled governance: Often referred to as “smart government”, the use of integrated technology platforms that are easily accessible across various devices is certainly key to providing access, transparency, speed, participation and redressal in public services. For example, on December 10, 2014, the President launched the Karnataka Mobile One app in Bengaluru that would provide citizens a range of e-governance services over mobile phones.

(iii) Meaningful PPPs: The creative use of public-private partnerships (PPPs) is a key attribute of the smart city concept. PPPs are to be used not only as a source of much-needed capital but also for the efficient delivery of utilities with agreed service-level standards.

(iv) Safety and security: This aspect is high in public consciousness, especially with disconcerting news on the safety of women, road rage, robbery attacks on the elderly and juvenile delinquency. Clearly, networks of video-cameras, brightly lit public areas, intensive patrolling and surveillance, identity-verified access, and rapid response to emergency calls are all on the expectations list.

(v) Financial sustainability: The 74th Amendment to the Constitution (1992) enjoins towns and cities to “take charge of their own destinies”. It also has to do with the elements of fiscal discipline that would enable the raising of long-term debt like municipal bonds.

(viii) Transit-oriented habitats: Conveniently networked public transportation with first- and last-mile connectivities in place, reduced motivation to use personal vehicles, use of electric cars, and bicycle paths are all in the expectation matrix. like an “odd and even scheme” launched in Delhi.

(ix) Green features: Minimising the carbon footprint. Parks and verdant open spaces, absence of pollution, use of renewables, conservation and recycling are mandatory. 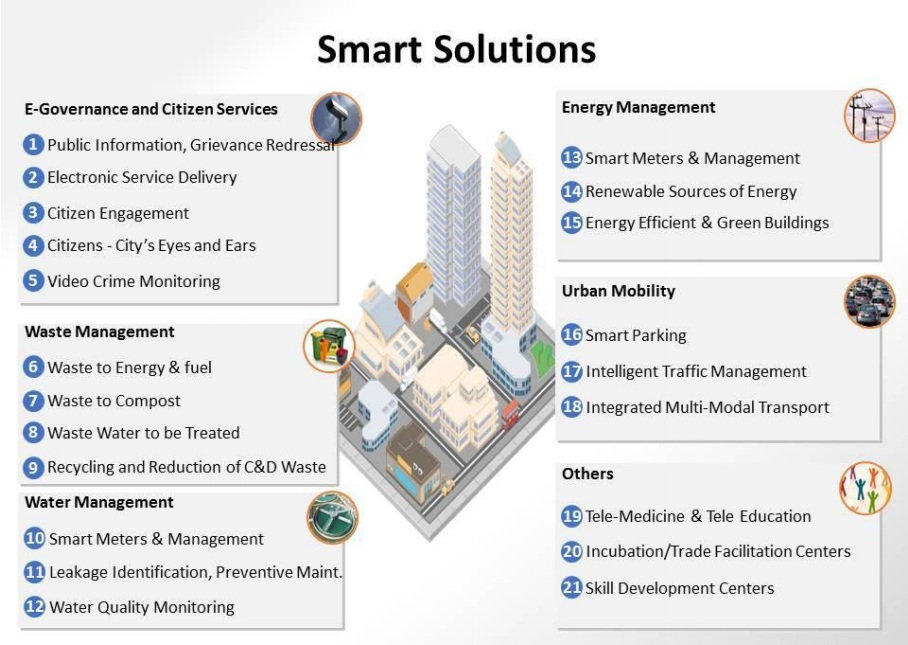 # Accordingly, the purpose of the Smart Cities Mission is to drive economic growth and improve the quality of life of people by enabling local area development and harnessing technology, especially technology that leads to Smart outcomes.

# Area based development will transform existing areas (retrofit and redevelop), including slums, into better planned ones, thereby improving liveability of the whole City. New areas (greenfield) will be developed around cities in order to accommodate the expanding population in urban areas.

# Application of Smart Solutions will enable cities to use technology, information and data to improve infrastructure and services.

# Comprehensive development in this way will improve quality of life, create employment and enhance incomes for all, especially the poor and the disadvantaged, leading to inclusive Cities.