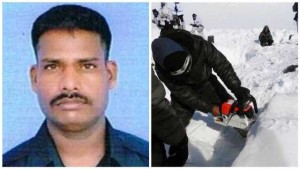 Lance Naik Hanamanthappa, who was battling for his life at the Army’s Research & Referral hospital in New Delhi, has passed away. He was admitted at the hospital on February 9th morning and was on ventilator since. His condition steadily deteriorated due to multiple organ failure. The soldier of 19 Madras Regiment was rescued alive on Monday night (February 8th) after being buried under 35 feet of snow for six days. He was flown to Delhi in an Air Force aircraft. The avalanche had buried their camp on February 3.

RIP THE BRAVE HEART OF INDIA