DayTodayGK has prepared a list of National Emblems of Famous Countries.

A national emblem is a seal or an emblem, which is being used for a country as a symbol. Many countries have a seal or emblem in addition to a national flag, national birds, trees, flowers, etc. 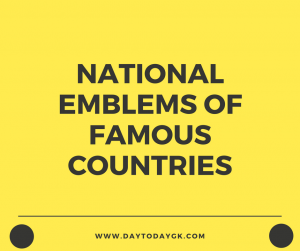