Everything You Need to Know about Motor Vehicles (Amendment) Bill, 2016

The Lok Sabha has passed the Motor Vehicles (Amendment) Bill, 2016. The Bill was introduced on April 7 in the Lok Sabha. The Bill amends the Motor Vehicles Act, 1988 to address issues such as third party insurance, regulation of taxi aggregators, and road safety. It is very important that vehicles on the road have insurance to ensure that they are sticking to the rules and protecting themselves as well as others. That is why companies like one sure insurance as well as others in the same line, are available to those who have a car, motorbike, or another vehicle.

What is the Bill all about?

Background of the Bill

The changes in the Motor Vehicles (Amendment) Bill, 2016, were approved by the Union cabinet on March 31. The bill was introduced in the Lok Sabha last August and was referred to a parliamentary standing committee, whose suggestions have been endorsed by the Union Cabinet.

The bill introduced in Parliament last year had proposed 89 clauses for amendment out of which only 57 were accepted by the Parliament Standing Committee on Transport.

The basic aim of the bill is “to save human lives”,as a whopping five lakh accidents take place every year claiming around 1.5 lakh lives across the country. 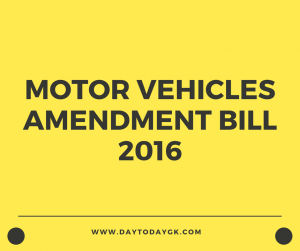 Highlights of the Bill