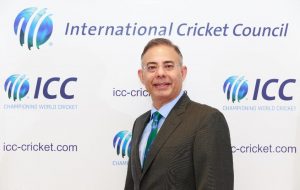 The International Cricket Council (ICC) announced that Manu Sawhney will assume the position of Chief Executive with immediate effect. Sawhney has been working alongside the outgoing Chief Executive David Richardson for the last six weeks to ensure a smooth transition for the organization. Richardson will remain with the ICC until July as originally planned to oversee the delivery of the ICC Men’s Cricket World Cup 2019.

India-born Sawhney, the unanimous choice of the nominations committee, came to prominence during a 17-year-long career at ESPN-Star Sports (ESS), where he rose to become managing director. It was in his time with the company that ESS sealed the broadcasting deal for global ICC events in the 2007-15 cycle. Sawhney then moved to Singapore Sports Hub (SSH), where he worked as CEO, and also sits on the audit committee of Manchester United Sports Ltd.

The ICC has 105 members: 12 Full Members that play Test matches and 93 Associate Members. The ICC also appoints the umpires and referees that officiate at all sanctioned Test matches, One Day International and Twenty20 Internationals. It promulgates the ICC Code of Conduct, which sets professional standards of discipline for international cricket,[3] and also co-ordinates action against corruption and match-fixing through its Anti-Corruption and Security Unit (ACSU).