There is no escaping the paperwork while investing in financial products. Be it, opening a new bank account, demat account or buying insurance, filling the Know Your Client (KYC) documents is a mandatory procedure today. 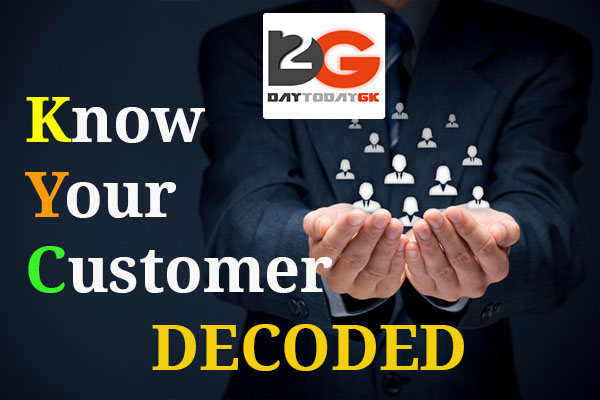 KYC is a client identification program that verifies and maintains records of the identity and address of investors.

KYC norms were introduced in 2002 by the Reserve Bank of India (RBI). It directed all banks and financial institutions to put in place a policy framework to know their customers before opening any account. The purpose was to prevent money laundering, terrorist financing, theft and so on. Today other regulators too have made KYC mandatory. The Securities and Exchange Board of India (Sebi) has mandated it for mutual funds and broking accounts, the Insurance Regulatory Development Authority (IRDA) while buying insurance and the Forwards Markets & Commission (FMC) for commodity trading. You need to submit it even for making post office deposits.

When KYC is required?
KYC has to be followed by every financial institute while dealing with customers. KYC procedure needs to be adhered to by a customer during following instances:

What are the KYC requirements for opening a bank account?

To open a bank account, one needs to submit a ‘proof of identity and proof of address’ together with a recent photograph.

Documents to be given as ‘proof of identity’ and ‘proof of address’?

The Government of India has notified six documents as ‘Officially Valid Documents (OVDs) for the purpose of producing proof of identity. These six documents are:

What does KYC control?

Would it be possible, if I do not have any of the officially valid documents, to have a bank account, which is not subjected to any limitations as in the case of ‘small accounts’?

A normal account can be opened by submitting a copy of any one of the following documents:

(ii) letter issued by a gazetted officer, with a duly attested photograph of the person.

This, however, is not a general rule and it is left to the judgement of the banks to decide whether this simplified procedure can be adopted in respect of any customer.

Companies and distributors say, KYC requirements have burdened them with substantial administrative obligations. The verification rules place a financial burden on banks, insurance companies and mutual funds due to the involved costs. Currently, every entity has to individually conduct this verification which results in duplication of effort for customers as well as the institutions.

There is a need to simplify KYC requirements . The authorities could opt for centralisation of the KYC norms to make investing easy for those not well versed with paperwork. Mutual funds have done this at an industry level by giving the mandate to a single entity, CDSL Ventures.

A uniformity in requirements for KYC prescribed by all authorities would help make the filing easier. One important document that will make life simpler is – ‘Aadhar’, the unique identification number to be provided to each citizen by Unique Identification Authority of India (UIDAI), a government initiative.

e-KYC refers to electronic KYC. e-KYC is possible only for those who have Aadhaar numbers. While using e-KYC service, you have to authorise the Unique Identification Authority of India (UIDAI), by explicit consent, to release your identity/address through biometric authentication to the bank branches/business correspondent BC). The UIDAI then transfers your data comprising name, age, gender, and photograph of the individual, electronically to the bank/BC. Information thus provided through e-KYC process is permitted to be treated as an ‘Officially Valid Document’ under PML Rules and is a valid process for KYC verification.