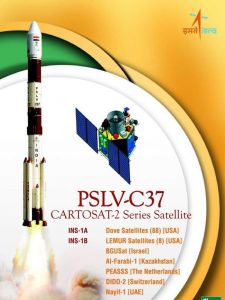 The Indian Space Research Organisation (ISRO) on 15 February 2017 at 9:30 am successfully launched a record 104 satellites into space on a single rocket from Sriharikota in Andhra Pradesh. With the successful launch, India did something no country has done before.

Last year, ISRO had set a national record for itself when it had launched 20 satellites in one go. It is using the same rocket this time — the X
L version of the popular Polar Satellite Launch Vehicle (PSLV), to push the boundaries of efficiency and effectiveness in space launches. Prime Minister Narendra Modi, an enthusiastic supporter of India’s space programme was congratulated the ISRO for the achievement of such a feat.

This launch will go in history as one of the most successful space programmes in the history of the free world.

India has received widespread recognition for the success of its space programmes such as the Chandrayan and Mission Mars. The ISRO has managed to conjure up some of the most productive missions which have also been cost-effective as compared to our western counterparts.

The launch will be a major feat in country’s space history as no exercise on this scale has been attempted before. Since September 2015, the PSLV has launched 18 small US earth imaging satellites and in a total of 79 foreign spacecraft — which earns it some revenue and an increasingly global market share.