National Rural Employment Guarantee Act 2005 (or, NREGA) was later renamed as the “Mahatma Gandhi National Rural Employment Guarantee Act” (or, MGNREGA), is an Indian labour law and social security measure that aims to guarantee the ‘right to work’. It aims to enhance livelihood security in rural areas by providing at least 100 days of wage employment in a financial year to every household whose adult members volunteer to do unskilled manual work. 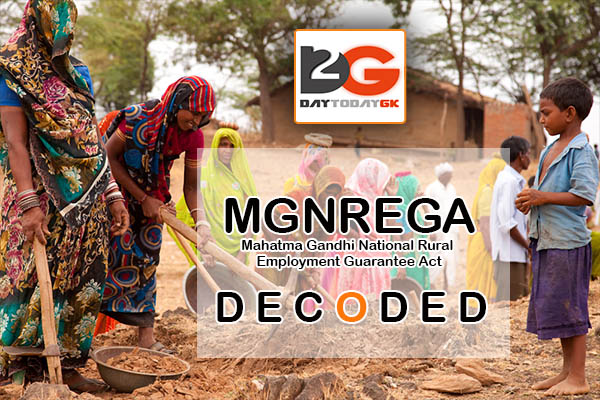 The National Rural Employment Guarantee Act 2005 (NREGA) is a social security scheme that attempts to provide employment and livelihood to rural labourers in the country. In an effort to make inclusive and overall development a reality, the NREGA was passed as a labour law and implemented across 200 districts in 2006. By 2008, it came to cover the entire country. The scheme was designed to provide any adult who registers for rural employment a minimum job guarantee of 100 days each financial year. This includes non-skilled work, making it one-of-its-kind across the world. It was later renamed the Mahatma Gandhi National Rural Employment Guarantee Act (MGNREGA).

Starting from 200 districts on 2 February 2006, the NREGA covered all the districts of India from 1 April 2008. The statute is hailed by the government as “the largest and most ambitious social security and public works programme in the world”.

Another aim of MGNREGA is to create durable assets (such as roads, canals, ponds, wells). Employment is to be provided within 5 km of an applicant’s residence, and minimum wages are to be paid. If work is not provided within 15 days of applying, applicants are entitled to an unemployment allowance. The implementation of MGNREGA was left to the Gram Panchayats. The involvement of contractors is banned. Labour-intensive tasks like creating infrastructure for water harvesting, drought relief and flood control are preferred.

The MGNREGA has been at the receiving end of much criticism over the years. From being criticised for encouraging corruption to increasing inequality to being called an election card for the UPA – the scheme has been picked apart for a variety of reasons.

Despite the opposition, the Central government (Modi) has brought about initiatives and changes to MGNREGA that have improved the payment mechanism to tackle the issues pertaining to delayed payment of wages. The Mobile Monitoring System was introduced towards the end of 2014. This system makes way for real-time monitoring of the progress of projects that employ labour under the scheme. This also regulates attendance and work environment in these work sites. Social audit ensures transparency by allowing public scrutiny of all records and accounts. This was targeted at reducing corruption – one of the main challenges in successful implementation of MGNREGA.

The main drawback of this scheme is lack of durable asset creation. Yes it is true that it had created a lot of opportunity in rural areas, and employment is also given to rural un-skilled citizens, but success of NREGA should not only be assessed in terms of employment provided but also the asset created. In that matter it is not as successful as it should be.

Some major challenges have been identified by the Minister of Rural Development and listed on the MGNREGA website for public discussion. These are :
1. MGNREGA provides a legal entitlement to manual work. If work cannot be provided on demand there is provision for unemployment allowance. This demand driven legal entitlement is not functional
2. MGNREGS has been unable to substantially reduce distress migration from rural areas because workers do not have a timely assurance that work will be made available in the periods when it is required
3. There are significant delays in payments to workers
4. The number of days of work provided under MGNREGS may not adequately meet demand
5. The quality of assets created under MGNREGA and their relevance to the livelihoods of the poor is inadequate
6. MGNREGS is unable to assure payments of wages at the stipulated rate
7. The works executed under MGNREGS are not based on a strong particpatory grassroots planning process.

Though MGNREGA has positive impact on employment pattern of women but in some states their presence is also less in average. The gained benefits of women as community can be understood by increased presence in the gram-sabha, increasing number of women in speaking out in the meetings, increasing capacity of interaction etc. This unique feature little bit found in some states too. But the poor implementation across the nation (such as lack of child care facility, worksite facility and illegal presence of contractors) accrued the gender sensitiveness of this Act mainly in north-eastern state. Certain initiatives and changes should be taken to remove these barriers. The valuable gains should not be derailed for poor implementation.