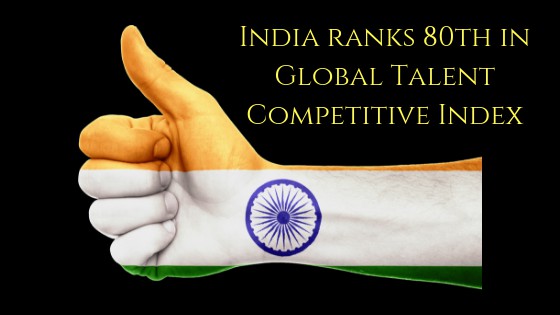 Global Talent Competitive Index: India has moved up one position to rank 80th on the Global Talent Competitive Index 2019 ranking. Switzerland continues to top the list. The ranking was released on the first day of the World Economic Forum (WEF) Annual Meeting by INSEAD business school in partnership with Tata Communications and Adecco Group. Switzerland is followed by Singapore, the US, Norway and Denmark in the top five on the list.

With an overall position of 45th and despite a fall of two places, China is the best performer among BRICS countries. The survey measures how countries and cities grow, attract and retain talent, ranking 125 countries and 114 cities across all groups of income and levels of development.

The report also said cities rather than countries are developing stronger roles as talent hubs and will be crucial in reshaping the global talent scene. The top-ranked city this year is Washington, DC, followed by Copenhagen, Oslo, Vienna and Zurich.