One of the most important topics in Current Affairs / General Awareness category is Latest Defence News. The D2G Team has come up with the major Defence News 2017. You can download the same in PDF format at the bottom of this post. 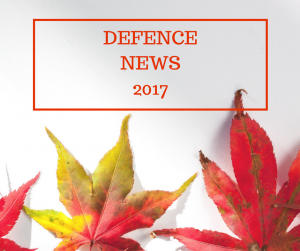 Border Security Force (BSF) has launched operation ‘Sard Hawa’ at the western international border of Rajasthan, under which vigil will be beefed-up to check the instances of infiltration due to the dense fog in the area. The operation will continue till 28 January.

The purpose of the operation is to keep a hawk’s eye on the international border, where vigil has been beefed-up and officers have also been asked to be part of operation to motivate jawans.

India has successfully tested the Agni-IV ballistic missile, which has a strike range of 4,000km, from the Wheeler Island off Odisha coast. The actual operational induction of the missile, which was tested for a range of only 3,000 km, will take another couple of years. The road-mobile Agni-IV and Agni-V, in turn, are specifically meant for deterrence against China, which can target any Indian city with its formidable inventory of missiles.

Aircraft carrier INS Vikramaditya backed by nuclear submarine INS Chakra besides fighting assets of the Indian Navy and Coast Guard have come together in the country’s biggest inter-service ‘Tropex’ exercise along the western seaboard. The navy’s annual Theatre Readiness Operational Exercise (TROPEX) got underway on January 24.

A key committee set up by Defence Minister Manohar Parrikar to suggest ways to restructure the acquisition wing will submit its report which will pitch in for a separate set up for defence procurement.

The panel was set up in May last year by Parrikar following recommendations of the Dhirendra Singh Committee, which had given inputs for the new Defence Procurement Policy.

The Indian Army has successfully test-fired the advanced BrahMos Block III land attack cruise missile in the Andaman and Nicobar Islands for the second consecutive day.

The missile was also test-fired, and the Army said the test flight met all parameters in a “copybook manner”. The successive launches reinforce the formidable weapon’s precision strike capability. The long-range tactical weapon was successfully tested from the same location on 2 May, 2017.

China’s Navy has commissioned a sophisticated electronic reconnaissance ship, capable of conducting all-weather, round-the-clock observation on multiple targets, the latest addition to Beijing’s expanding fleet amid tensions over its assertiveness in the disputed South China Sea.

Indigenously-made fighter jet Tejas will make its Republic Day debut in this year’s parade, the Indian Air Force. The IAF will use three of the Tejas which has been made by public sector giant Hindustan Aeronautics Limited.

The system, equipped on the ship, works using sunlight and hence, is 100% reliable for power source that can be used for communication equipment, battery charging and general lightings onboard round the clock with battery outputs.

India has successfully test-fired its interceptor missile off the Odisha coast, achieving a significant milestone in the direction of developing a two-layered Ballistic Missile Defence system. The interceptor was launched from Abdul Kalam Island or Wheeler Island.

China has reportedly tested a new version of a missile that can carry up to 10 nuclear warheads, signaling a major shift in its nuclear capability as Beijing gears up for a possible military showdown with the US under Trump Presidency.

The flight test of the DF-5C missile was carried out last month using 10 multiple independently targetable reentry vehicles, or MIRVs.

The Indian Navy is operating four sailing vessels — Tarangini, Sudarshini, Mhadei and Tarini — capable of open ocean deployments and all the four have been built in shipyards at Goa.

Former Indian Navy Ship Viraat to be decommissioned on Mar 6

Indian Naval Ship (INS) Viraat, which was first commissioned in the Indian Navy on May 12, 1987, will be decommissioned from service on March 6. A press briefing and interaction regarding the same will be organised by the navy on February 27.

This is the second time that the missile has been test-fired in less than a month and is part of an effort to put in place a multi-layer missile defence system.

The Navy has successfully test-fired an anti-ship missile for the first time from an indigenously built Kalvari class submarine. The Navy described the launch as a significant milestone in enhancing its “sub-surface” warfare prowess.

The weapon was fired from the submarine, the first of India’s six Scorpene-class submarines which are being built under the Project 75, and it “successfully hit” a surface target during the trial in the Arabian Sea.

After nearly 20 years, the indigenously-manufactured INSAS rifles will be finally ‘retiring’ from the army and replaced by an imported assault rifle to be manufactured in the country later.

The reason for phasing out of INSAS, as cited by experts, was that it was not effective at long range and at best, could only maim the enemy.

INS Tillanchang is the third ship of four follow-on WJFAC built by the Garden Reach Shipbuilders and Engineers (GRSE) Kolkata.

Japan plans to dispatch its largest warship on a three-month tour through the South China Sea beginning in May, three sources said, in its biggest show of naval force in the region since World War Two.

China claims almost all the disputed waters and its growing military presence has fueled concern in Japan and the West, with the United States holding regular air and naval patrols to ensure freedom of navigation.

In a boost to India’s martime prowess, the Navy has successfully conducted the maiden trial firing of newly installed surface-to-air Barak missile system from its aircraft carrier INS Vikramaditya.

During the firing carried out in the Arabian Sea, the missile was fired against a live low flying high speed target. The target was successfully engaged and destroyed.

Naval ship ‘INS Chennai’ was formally dedicated to the city in the presence of Chief Minister K Palaniswami and Flag Officer Commanding-in-Chief, Eastern Naval Command, Vice-Admiral HCS Bisht. The dedication ceremony of the ‘P15A Guided Missile Destroyer’ was marked by a series of drills and events, besides unveiling of a plaque by Palaniswami at the Chennai Port Trust.

The dedication ceremony of the ‘P15A Guided Missile Destroyer’ was marked by a series of drills and events, besides unveiling of a plaque by Palaniswami at the Chennai Port Trust.

Navy ships Karwar, Kakinada decommissioned after over 30 yrs of service

Indian Naval Ships Karwar and Kakinada were decommissioned with Navy chief admiral Sunil Lanba being the chief guest for the ceremony. Lanba had served as the second commanding officer of INS Kakinada.

INS Karwar (M67), was the first of the ‘Natya’ class minesweepers acquired from  the erstwhile USSR. INS Kakinada (M70), was the second of the same class and   also commissioned at Riga on 23 December 1986.

India successfully test-fired its indigenously developed nuclear-capable Prithvi-II missile, from a test range in Odisha as part of a user trial by the Army.

The Prithvi-II missile is capable of carrying 500 kg to 1,000 kg of warheads and is thrusted by liquid propulsion twin engines. It uses advanced inertial guidance system with manoeuvring trajectory to hit its target with precision and accuracy.

In pursuance of India’s Act East policy, Indian Naval Ship Sahyadri is on an overseas deployment to the South East Asia and Southern Indian Ocean. The ship would be on a port visit to Moresby from June 12 to 15.

The visit of the Indian Naval Ships seeks to underscore India’s peaceful presence and solidarity with friendly and harmonious countries towards ensuring good order in the maritime domain and to strengthen existing bonds between Papua New Guinea and India.