IDBI Bank is an Indian government-owned financial service company, formerly known as Industrial Development Bank of India, headquartered in Mumbai, India. It was established in 1964 by an Act of Parliament to provide credit and other financial facilities for the development of the fledgeling Indian industry.

It is currently 10th largest development bank in the world in terms of reach, with 3000 ATMs, 1746 branches, including one overseas branch at Dubai, and 1285 centres, including two overseas centres at Singapore & Beijing. It is one of 27 commercial banks owned by the Government of India.

1. Planning, promoting and developing industries with a view to filling the gaps in the industrial structure by conceiving, preparing and floating new projects.

2. Providing technical and administrative assistance for promotion, management and expansion of industry.

3. Providing refinancing facilities to the IFCI, SFCs and other financial institutions approved by the government.

4. Coordinating the activities of financial institutions for the promotion and development of industries.

5. Undertaking market and investment research, surveys and techno-economic studies helpful to the development of industries. 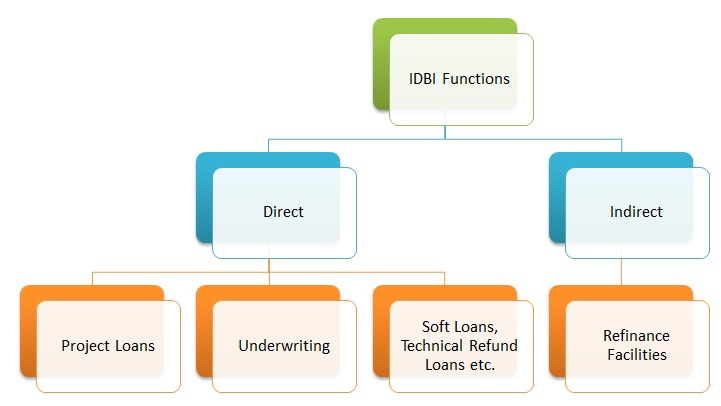 Small Industries Development Bank of India is an independent financial institution aimed to aid the growth and development of micro, small and medium-scale enterprises (MSME) in India. Set up on April 2, 1990, through an act of parliament, it was incorporated initially as a wholly owned subsidiary of Industrial Development Bank of India. Currently, the ownership is held by 33 Government of India owned/controlled institutions. It is the Principal Financial Institution for the Promotion, Financing and Development of the Micro, Small and Medium Enterprise (MSME) sector and for Co-ordination of the functions of the institutions engaged in similar activities.

1. To initiate steps for technological up-gradation and modernisation of existing units.

2. To expand the channels for marketing the products of Small Scale Industries sector in domestic and international markets.

Export-Import Bank of India is the premier export finance institution in India, established in 1982 under the Export-Import Bank of India Act 1981. Exim Bank of India has, over the period, evolved into an institution that plays a major role in partnering Indian industries, particularly the Small and Medium Enterprises, in their globalisation efforts, through a wide range of products and services offered at all stages of the business cycle, starting from import of technology and export product development to export production, export marketing, pre-shipment and post-shipment and overseas investment.

2. Providing technical, administrative and managerial assistance for promotion, management and expansion of exports; and

3. Undertaking market and investment surveys and techno-economic studies related to development of exports of goods and services.

The Exim Bank has a 17-member Board of Directors, with Chairman and Managing Director as the chief executive and full-time director. The Board of Directors consists of the representative of the Government of India, RBI, IDBI, ECGC, commercial banks and the exporting community.

National Housing Bank (NHB), a wholly owned subsidiary of Reserve Bank of India (RBI), was set up on 9 July 1988 under the National Housing Bank Act, 1987. NHB is an apex financial institution for housing. NHB has been established with an objective to operate as a principal agency to promote housing finance institutions both at local and regional levels and to provide financial and other support. NHB registers, regulates and supervises Housing Finance Company (HFCs), keeps surveillance through On-site & Off-site Mechanisms and co-ordinates with other Regulators.

3. To augment resources for the sector and channelise them for housing.

5. To regulate the activities of housing finance companies based on regulatory and supervisory authority derived under the Act.

6. To encourage augmentation of supply of buildable land and also building materials for housing and to upgrade the housing stock in the country.

7. To encourage public agencies to emerge as facilitators and suppliers of serviced land, for housing.

Non-bank financial companies (NBFCs) are financial institutions that provide banking services without meeting the legal definition of a bank, i.e. one that does not hold a banking license. These institutions typically are restricted from taking deposits from the public depending on the jurisdiction. The specific banking products that can be offered by NBFCs depends on the jurisdiction and may include services such as loans and credit facilities, savings products, investments and money transfer services.

In some jurisdictions, such as New Zealand, any company can engage in the banking business, except they are not allowed to use the word bank in their name. A company can only call itself a bank if it is a registered as such with the nation’s central bank. 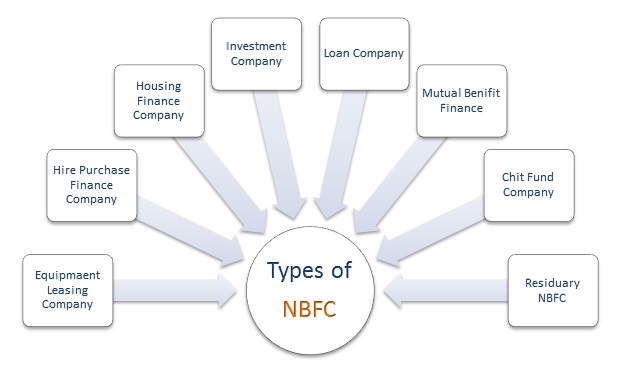 The Supervisory framework for NBFCs is based on three aspects—
(a) the size of NBFC,
(b) type of activity
(c) the acceptance or otherwise of public deposits.

3. An effective market intelligence network, and

4. A system of submission of exception reports by auditors of NBFCs

For the purpose of the new regulations, NBFCs have been divided into three broad categories an indicated below:

(b) NBFCs not accepting public deposits are engaged in a loan, investment, hire purchase finance and equipment leasing activities.

(c) NBFCs not accepting public deposits and has acquired shares/securities in their own group/ holding/subsidiary companies of not less than 90 percent of their total assets and are not trading in these shares/securities.