FERA : The Foreign Exchange Regulation Act (FERA) was legislation passed in 1973 that imposed strict regulations on certain kinds of payments, the dealings in foreign exchange and securities and the transactions which had an indirect impact on the foreign exchange and the import and export of currency. FERA was introduced at a time when foreign exchange (Forex) reserves of the country were low.

FEMA : The Foreign Exchange Management Act, 1999 (FEMA) is an Act of the Parliament of India “to consolidate and amend the law relating to foreign exchange with the objective of facilitating external trade and payments and for promoting the orderly development and maintenance of foreign exchange market in India”. It paved the way for the introduction of the Prevention of Money Laundering Act, 2002, which came into effect from 1 July 2005. 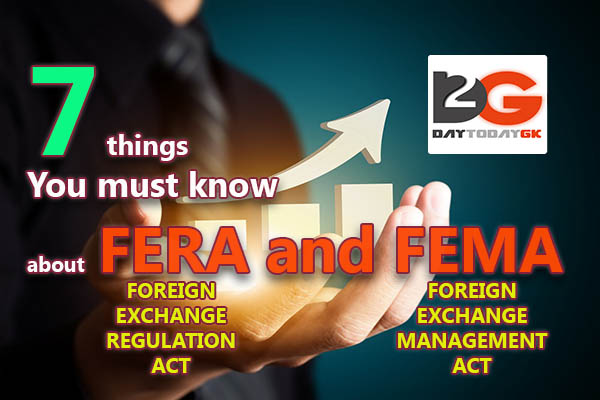 1. FEMA replaced FERA: FERA was repealed in 1998 by the government of Atal Bihari Vajpayee and replaced by the Foreign Exchange Management Act, which liberalised foreign exchange controls and restrictions on foreign investment.

3. FEMA was intoduced because the FERA did not fit in with the Post-Liberalization Policy.

4. What Changes FEMA bring? – It made all offence regarding Foreign Exchange Civil Offence, as opposed to criminal offences as dictated by FERA.

5. Main objective of FEMA : Conolidate (strengthen) and amend the law relating to Foreign Exchange. AND

To Promote the orderly development and maintenance of foreign exchange market in India.

6. FEMA is applicable to all parts in India (abroad also if agency owned by an Indian).