What is Crohn’s Disease?

Named after Dr. Burrill B. Crohn, who first described the disease in 1932 along with colleagues Dr. Leon Ginzburg and Dr. Gordon D. Oppenheimer, Crohn’s disease belongs to a group of conditions known as Inflammatory Bowel Diseases (IBD).

Crohn’s most commonly affects the end of the small bowel (the ileum) and the beginning of the colon, but it may affect any part of the gastrointestinal (GI) tract, from the mouth to the anus. Crohn’s disease can also affect the entire thickness of the bowel wall.

Recognizing the Signs and Symptoms

Symptoms related to inflammation of the GI tract: 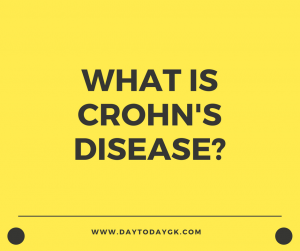 In some cases, those who have Crohn’s disease may experience some pain in their feet or ankles. However, this type of pain could occur for a number of different reasons, so it is important that you get it checked over by your doctor to know for sure. Certain medications that you may be taking could be the cause of your pain and for anyone who is suffering, it is important that you find a way to control and manage this so it doesn’t place a further hindrance on your life. For example, you can look into the benefits of an epsom salt foot soak if your pain is primarily in your feet and this can be a great method to try before deciding to consider something else. Before doing anything though, you must talk through your options with a professional first.

What are the Causes of Crohn’s Disease? Who is Affected?

If you are diagnosed with Crohn’s Disease, it’s important to know and understand which part of your GI tract is affected and how this may affect the symptoms and complications you experience.

The most common form of Crohn’s, ileocolitis affects the end of the small intestine (the ileum) and the large intestine (the colon). Symptoms include diarrhea and cramping or pain in the right lower part or middle of the abdomen. This type is often accompanied by significant weight loss.

This type affects only the ileum. Symptoms are the same as ileocolitis. In severe cases, complications may include fistulas or inflammatory abscess in right lower quadrant of abdomen.

This type affects the stomach and the beginning of the small intestine(the duodenum). Symptoms include loss of appetite, weight loss, nausea, and vomiting.

This type is characterized by patchy areas of inflammation in the upper half of the small intestine (the jejunum). Symptoms include mild to intense abdominal pain and cramps following meals, as well as diarrhea. In severe cases or after prolonged periods, fistulas may form.

This type affects the colon only. Symptoms include diarrhea, rectal bleeding, and disease around the anus (abscess, fistulas, ulcers). Skin lesions and joint pains are more common in this form of Crohn’s than in others

Crohn’s disease is characterized by a range of signs and symptoms, so there is no single test that can determine the diagnosis of Crohn’s with certainty.

Early steps in the diagnostic process can include laboratory tests of blood and stool matter, as well as X-rays of the upper and lower GI tract including the use of Barium, a chemical that helps doctors see more details of your GI tract by increasing contrast of the X-Ray image.

There are two types of endoscopic examinations: a colonoscopy and an upper endoscopy.

A colonoscopy to look for any polyps or pre-cancerous changes in the setting of colitis. Chromoendoscopy is a technique of spraying a blue liquid dye during the colonoscopy in order to increase the ability of the endoscopist specialist to detect slight changes in the lining of your intestine.

Typically, these tests include drinking an oral “contrast” and having a fluoroscopic x-ray, Computed Tomography (CT) scan, or Magnetic Resonance Imaging scan. These pictures are transmitted to a receiver belt. The camera is then expelled through a bowel movement. Specialized endoscopies to visualize the small intestine, sometimes called “balloon endoscopy”, may be needed for areas of the intestine that are hard to reach. Nowdays, with the advancement of technology in the field of medical science, C-Arms could be used for the same purpose. In addition, C-Arms could be beneficial during surgery too as they can provide a live feed of the x-ray image during surgery. In all honesty, a lot of medical facilities might lack this technology because of cost issues. However, they could still purchase them by looking for Used C-Arms For Sale. By doing so, they may be able to get C-Arms at a much lower price that could help them identify Crohn’s disease.

A combination of treatment options can help you stay in control of the disease as there is no standard treatment that will work for all patients. Each patient’s situation is different and treatment must be followed for each circumstance.

Medication treating Crohn’s disease is designed to suppress your immune system’s abnormal inflammatory response that is causing your symptoms. Medication can also be used to decrease the frequency of symptom flare ups (maintaining remission). With proper treatment over time, periods of remission can be extended and periods of symptom flare ups can be reduced. Several types of medication are being used to treat Crohn’s disease today.

When battling a disease such as Crohn’s, it is very easy for people to think about the normal treatment paths that are on offer instead of researching some of the other treatment paths that you could say are a little less than conventional. For example, the idea of trying the many different CBD-infused products that are on the market, like those that can be found on sites Organic CBD Nugs, is something that people may only consider for ailments like anxiety, depression or stress when they actually work for a lot of different health problems too. Of course, every person reacts differently to treatments so it is all about finding what works for you, and if you find that something like CBD is effective, then this could be used for your treatment of Crohn’s.

In some circumstances, a health care provider may recommend adding an additional therapy that will work in combination with the initial therapy to increase its effectiveness. For example, combination therapy could include the addition of a biologic to an immunomodulator. As with all therapy, there are risks and benefits of combination therapy. Combining therapies can increase the effectiveness of IBD treatment, but there may also be an increased risk of additional side effects and toxicity.

For people diagnosed with Crohn’s disease, it is essential to maintain good nutrition because Crohn’s often reduces your appetite while increasing your body’s energy needs. Additionally, common Crohn’s symptoms like diarrhea can reduce your body’s ability to absorb any kind of nutrition. Supplements may be reccomended so that high nutritional standards are maintained. The doctor may also reccomend the inclusion of certain foods or oils into the diet such as CBD oil from health companies like Vibes CBD – https://vibescbd.co.uk/ to reduce bloating and inflammation of the digestive tract. Certain foods such as those high in caffiene should be avoided to prevent symptom flares.

Surgery becomes necessary when medications can no longer control symptoms, or if you develop a fistula, fissure, or intestinal obstruction. Surgery often involves removal of the diseased segment of bowel (resection), the two ends of healthy bowel are then joined together (anastomosis). While these procedures may cause your symptoms to disappear for many years, Crohn’s frequently recurs later in life.