Home » Articles » Everything You Need to Know about Artificial Intelligence

Artificial Intelligence (AI) is the branch of computer science concerned with making computers behave like humans. The term was coined in 1956 by John McCarthy at the Massachusetts Institute of Technology. 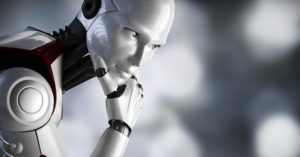 For example, Optical character recognition is no longer perceived as an exemplar of “artificial intelligence”, having become a routine technology. Capabilities currently classified as AI include successfully understanding human speech, competing at a high level in strategic game systems (such as Chess and Go), self-driving cars, and interpreting complex data using synthetic data generation technology.

Currently, no computers exhibit full artificial intelligence (that is, are able to simulate human behaviour). The greatest advances have occurred in the field of games playing. The best computer chess programs are now capable of beating humans. In May, 1997, an IBM super-computer called Deep Blue defeated world chess champion Gary Kasparov in a chess match.

General intelligence is among the field’s long-term goals. Approaches include

Many tools are used in AI, including versions of search and mathematical optimization, logic, methods based on probability and economics. The AI field draws upon computer science, mathematics, psychology, linguistics, philosophy, neuroscience and artificial psychology.

AI researchers have created many tools to solve the most difficult problems in computer science. Many of their inventions have been adopted by mainstream computer science and are no longer considered a part of AI. the following were originally developed in AI laboratories: