Home » Articles » What is Digital India? Everything You Need To Know!!!

What is Digital India?

Digital India is a campaign launched by the Government of India to ensure that Government services are made available to citizens electronically by improving online infrastructure and by increasing Internet connectivity or by making the country digitally empowered in the field of technology.

Digital India consists of three core components. These include: 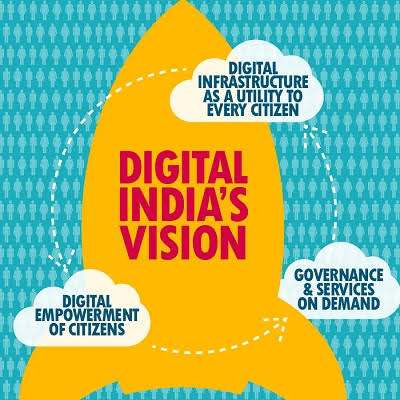 This programme has been envisaged and coordinated by the Department of Electronics and Information Technology (DeitY) in collaboration with various Central Ministries/Departments and State Governments. The Prime Minister as the Chairman of Monitoring Committee on Digital India, activities under the Digital India initiative is being carefully monitored. All the existing and ongoing e-Governance initiatives have been revamped to align them with the principles of Digital India.

The key areas are,

Several projects/products have already launched or ready to be launched as indicated below:

The estimated impact of Digital India by 2019 would be cross cutting, ranging from broadband connectivity in all Panchayats, Wi-fi in schools and universities and Public Wi-Fi hotspots. The programme will generate huge number of IT, Telecom and Electronics jobs, both directly and indirectly. Success of this programme will make India Digitally empowered and the leader in usage of IT in delivery of services related to various domains such as health, education, agriculture, banking, etc.