Before diving deep into the concept of Writ and their types, one must know what does a writ mean?

A writ is a formal written order issued by a judicial or administrative body to do a specific act. This body is generally a Court. 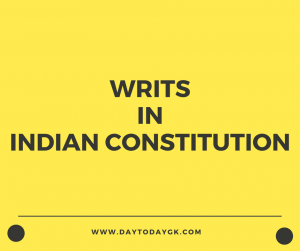 Article 32 of the Constitution of India- The Supreme Court shall have power to issue directions or orders or writs, including writs in the nature of habeas corpus, mandamus, prohibition, quo warranto and certiorari, whichever may be appropriate, for the enforcement of any of the rights conferred.

Article 139 of the constitution of India -Supreme Court has been invested with the powers to issue certain writs Parliament may by law confer on the Supreme Court power to issue directions, orders including prerogative writs.

Article 226 of the constitution of India- Under Article 226 of Constitution, High Court has power to issue such writs and orders as are necessary for administrative action and judicial or quasi-judicial action.

There are two types of writs:

Prerogative writs are a subset of the class of writs which are issued by the court under special circumstances and are often known as extra ordinary remedies.

Prerogative writs are of 5 types:

The literal meaning of this writ is “To have the body”. It is issued when there is a violation of fundamental right of liberty. This writ is issued by Supreme Court or High Court of India. It is issued to produce a person who has been detained before the Court and set him free, if there is no legal or valid justification of his detention. Habeas corpus is a protection against illegal confinement.

Who can file the petition?

There is a general rule that a petition can only be filed by the person whose rights have been infringed. As they always say, there is always an exception.

So, here the exception is writ of Habeas Corpus.

It is a Latin word which means “We Command.” It is an order from superior Court to any Sub-ordinate

to do some specific act which that body is obliged under law to do but fails to do so. It serves as a reminder to these authorities to perform their duty.

This petition can be filed before the court only by the aggrieved individual. It can be filed only when the legal right of the person is violated.

To whom it can be issued?

The primary scope and function of mandamus is to “command” and “execute” rather than to “enquire” and “adjudicate”.

For example, the High Court cannot entertain writ petitions for mandamus to the Government who fails to deposit and pay in the requisite time an enhanced compensation account as ordered by a lower Court. The petitioners in this case would be directed to approach the executing Court for appropriate relief.

It can be issued to

It can only be filed by an aggrieved individual.

The purpose of the writ is to quash or nullify the judgement/direction/order issued by such a judicial/quasi-judicial body.

It means to Stop. A writ of prohibition is a writ directing a subordinate to stop doing something the law prohibits. It is issued by the superior courts to Sub-ordinate who are doing something which exceeds to their jurisdiction or acting contrary to the rule of natural justice. When the writ is issued, proceedings in the lower court are stayed i.e Res sub judice. The writ is issued in both cases where there is excess of jurisdiction and where there is absence of jurisdiction.

It is issued to

Note: It cannot be issued against a legislative or administrative body.

This petition can be filed only by the aggrieved individual.

The purpose of the court is to prohibit the judicial/quasi-judicial body from proceeding further with the case.

There are circumstances in which writ cannot be filed:

A.Dhanasekaran vs The Commissioner on 21 March, 2011

Synopsis:
• It means to “stop”.
• It is issued during the pendency of the case.

Difference between writ of Certiorari and writ of prohibition.

Most of the people get confused between these two writs I.e. Certiorari and Prohibition. They may sound same but there lies a thin line of difference between them.

The meaning of the writ is “What is your authority”. This writ is issued to restrain a person from holding a public office to which he is not entitled to. It questions to the particular person to explain by what authority he shall hold office.

When this writ is issued, it has the effect of removal of the person from public office with immediate effect.

What you think about this Article? Comment your suggestions below. If you have any query ask us. We are happy to help you. 🙂