World Migratory Bird Day (WMBD) was initiated in 2006 and is an annual awareness-raising campaign highlighting the need for the conservation of migratory birds and their habitats. Each year, on the second weekend in May, people around the world take action and organize public events such as bird festivals, education programmes, exhibitions and bird-watching excursions to celebrate WMBD.

World Migratory Bird Day has a global outreach and is an effective tool to help raise global awareness of the threats faced by migratory birds, their ecological importance, and the need for international cooperation to conserve them. 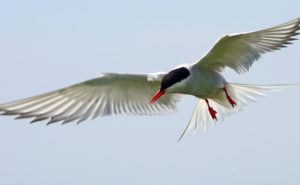 Migratory birds have the perfect morphology and physiology to fly fast and across long distances. Often, their journey is an exhausting one, during which they go to their limits. The Red Knot has one of the longest total migration routes of any bird, travelling up to 16,000 kilometres twice a year. It breeds in Siberia and overwinters on the west coast of Africa, some even going down to the tip of South Africa.

Birds migrate to seek out resources: the primary ones are food and nesting locations. For birds that nest in the Northern Hemisphere, for example, this means migrating northward in the spring to take advantage of increasing insect populations and budding plants and numerous nesting locations.