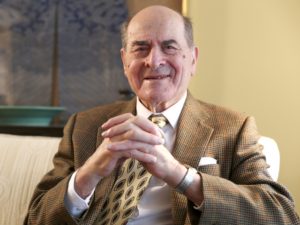 Henry Judah Heimlich was an American thoracic surgeon and medical researcher. He is widely credited as the inventor of the Heimlich maneuver, a technique of abdominal thrusts for stopping choking, described in Emergency Medicine in 1974. He also invented the Micro Trach portable oxygen system for ambulatory patients and the Heimlich Chest Drain Valve, or “flutter valve,” which drains blood and air out of the chest cavity.

Heimlich first published his views about the maneuver in a June 1974 informal article in Emergency Medicine entitled, “Pop Goes the Cafe Coronary”. On June 19, 1974, the Seattle Post-Intelligencer reported that retired restaurant-owner Isaac Piha used the procedure to rescue a choking victim, Irene Bogachus, in Bellevue, Washington.

From 1976 to 1985, the choking-rescue guidelines of the American Heart Association and of the American Red Cross taught rescuers to first perform a series of backblows to remove the FBAO (foreign body airway obstruction); if backblows failed, then rescuers learned to proceed with the Heimlich maneuver (aka “abdominal thrusts”).

From the early 1980s, Heimlich advocated malariotherapy, the deliberate infection of a person with benign malaria in order to treat ailments such as cancer, Lyme disease and (more recently) HIV.

Henry Heimlich, a man whose technique has saved more than one lakh people lives in the World has passed away on December 16′ 2016. May his soul Rest in Peace.