“Diamonds” – When we hear this word, the first thing comes to our mind is it’s sparkling beauty followed by it’s cost, and also Leonardo Dicaprio’s Blood Diamond movie 🙂 . Why Diamonds are so costly? Why it is very special? What exactly it is? This Article is going to deal with all these questions and many!!! 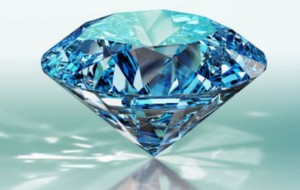 The word “Diamond” comes from the Greek word “Adamas” and means “unconquerable and indestructible”. Diamonds are the hardest natural substance on Earth. The diamond is a birthstone for people born in the month of April. The Earth is estimated at 4.5 billion years old. The oldest diamonds are believed to have been crystallized around 3.3 Billion years ago. Diamonds have many characteristics and features that make them worth all the money. The diamond can be scaled and graded based on 4Cs – diamond cut, color, clarity and carat, which could decide its value. These 4Cs can also help buyers understand and compare the quality as well as buy an authentic diamond.

The formation of natural diamond requires very specific conditions-exposure of carbon-bearing materials to high pressure, ranging approximately between 45 and 60 kilobars, but at a comparatively low temperature range between approximately 900 and 1,300 C. These conditions are met in two places on Earth; in the lithospheric mantle below relatively stable continental plates, and at the site of a meteorite strike.

Geologists believe that the diamonds in all of Earth’s commercial diamond deposits were formed in the mantle and delivered to the surface by deep-source volcanic eruptions.

Diamonds form about 100 miles below ground and have been carried to the earth’s surface by deep volcanic eruptions.

Under the immense heat and pressure far below the earth’s surface, the carbon atoms bond in a unique way that results in diamonds’ beautiful and rare crystalline structure.

Diamond has a hardness of 10 on Mohs scale of mineral hardness, with 1 being the softest (talc) and 10 being the hardest.

Under the normal pressures and temperatures we experience on the Earth’s surface, diamonds are 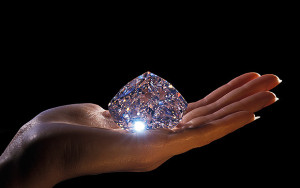 actually thermodynamically unstable, slowly transforming into graphite. But it is too slow for humans to notice.

Diamond has a high specific gravity. A diamond does not conduct electricity well (it is a semiconductor), but conducts heat extremely well. At a high enough temperature in the presence of oxygen, diamond can burn.

In order for diamonds to be valuable, they need to be cut in a specific way. A diamond’s cut is designed to magnify the crystal’s reflective surfaces, making it appear bright and sparkling. In order to achieve this, the rock must be precisely cut using a laser (see this website for more information on co2 laser cutting). Although lasers can be used to cut almost any material, diamonds are particularly suited for laser cutting.

Diamond has a high refractive index (2.417) and moderate dispersion (0.044) properties which give cut diamonds their brilliance.

What Diamonds are made of?

Diamonds are made out of the element carbon. So, all the atoms in a diamond are alike. Each one is bonded to four neighboring carbons, each exactly the same distance away. Once they get put together that way, it is very difficult to move them around. So, a diamond is one of the hardest substances we have.

Diamond is the most concentrated form of pure carbon in the natural world and the strongest mineral on Earth, far exceeding other carbon allotropes such as graphite and fullerite. The secret to diamond’s superior strength is found on the molecular level.

The ancient Romans and Greeks believed that diamonds were tears cried by the gods or splinters from falling stars, and Romans believed that Cupid’s arrows were tipped with diamonds.

Ancient Hindus used diamonds in the eyes of devotional statues, and believed that a diamond could protect its wearer from danger. Most diamonds found in nature are between one to three billion years old.

Diamond production has changed over time and the countries that are the main suppliers have changed as well. The technological advancements and modern equipment (you can click here for more information on mining machinery and where they could be found) led to the discovery of new diamond mines in various parts of the world – and it became apparent that diamond mines were not concentrated in only certain locations. India was the world’s original source of diamonds, beginning in the 1400s when Indian diamonds began to be sold in Venice and other European trade centers. Then in the 1700s India’s diamond supplies declined and Brazil became the world’s major source of diamonds, until late 1800s when a huge diamond reserve was discovered in South Africa. 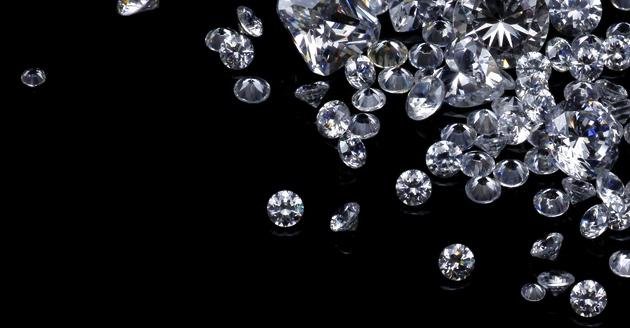 The U.S. is the world’s largest diamond market. Although the U.S. accounts for less than one-percent of total global gemstone production, America buys more than half of the world’s total gem quality diamonds.

We always welcome your thoughts! Please provide comments or suggestions for improving our services!!!