Hello Friends. We usually hear people saying “I have high Sugar”. “I have to take Sugar Tablet before meals”. “Don’t put Sugar in Tea”. “Please take the sweets. I should not eat.” “I have to take Insulin.” Most of the people use the term SUGAR for DIABETES.

Nowadays “Diabetes” has become a very common problem. Many websites have information on this condition, such as Rolling Paper, that help to educate people. It is everywhere. What is Diabetes? What causes Diabetes? What are it’s types? Can it be cured? Can it be prevented? What is Insulin?

This Article is going to answer all the above questions.

In simple words, Diabetes means the level of glucose in blood is too high. Blood always has some glucose in it because human body needs glucose for energy. But too much of glucose in the blood isn’t good for health.

How Glucose enters the body?

Glucose comes from the food we eat and is also made in our liver and muscles. Blood carries the glucose to all of the cells in human body.

What is Insulin? What is its role?

Insulin is a chemical (a hormone) made by pancreas. The pancreas releases insulin into the blood. Insulin helps the glucose from food get into the cells.

If the body does not make enough insulin or if the insulin doesn’t work the way it should, glucose can’t get into the cells. It stays in the blood itself. Then the blood glucose level then gets too high, causing pre-diabetes or diabetes.

Glucose is present in foods such as breads, cereals, fruit and starchy vegetables, legumes, milk, yoghurt and sweets. When our body is not producing enough Insulin, the glucose can’t be converted into energy.

What are the Types of Diabetes?

There are three main kinds of diabetes: type 1, type 2, and gestational diabetes. The result of type 1 and type 2 diabetes is the same: glucose builds up in the blood, while the cells are starved of energy. That said, in order to learn whether an individual is diabetes-free, in the pre-diabetic stage or suffering from Type 2 diabetes, he has to undergo a diabetes blood test. A diabetes blood test kit purchased from the likes of bloodtest.co.uk can help individuals look at the performance of their blood sugar levels over the last three months. This can further help them to make healthy choices. There are different types of blood tests available, ones that need to be done in a laboratory for advanced testing will be conducted in a controlled environment with such supplies as sterile testing tubes, distilled water 5l, high air quality conditions, etc. so that the results are gathered effectively.

People with type 1 diabetes depend on insulin every day of their lives to replace the insulin the body cannot produce. They must test their blood glucose levels several times throughout the day.

The onset of type 1 diabetes typically occurs in people under 30 years, but can occur at any age. About 10-15% of all cases of diabetes are type 1.

Medication in the form of tablets is often required to reduce the resistance to insulin or to stimulate the pancreas to make more insulin.

Type 2 diabetes usually occurs in people over age 40 who are overweight, but it can occur in people who are not overweight. In the past, it was referred to as “adult-onset diabetes,” but now it has started to appear more often in children because of the rise in obesity in young people. 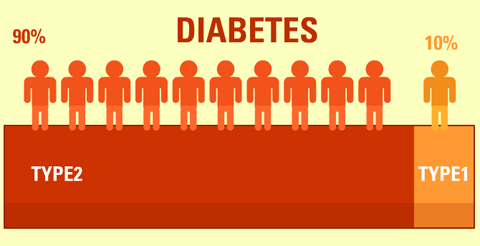 Between 5% and 10% of pregnant women will develop gestational diabetes and this usually occurs around the 24th to 28th week of pregnancy.

In pregnancy, the placenta produces hormones that help the baby grow and develop. These hormones also block the action of the mother’s insulin. This is called insulin resistance. Because of this insulin resistance, the need for insulin in pregnancy is 2 to 3 times higher than normal.

During this time the body may not be able to cope with the extra demand for insulin production and the blood glucose (sugar) levels will be higher resulting in gestational diabetes being diagnosed.

People at risk of type 2 diabetes can delay and even prevent the condition by:

What are the common symptoms of diabetes?

2015 theme is “Healthy Living and Diabetes“.

Myth – Diabetes is not serious

Fact – There is no such thing as “mild” diabetes. All types of diabetes are serious and can lead to complications if not well managed. Diabetes can affect quality of life and can reduce life expectancy.

Fact – Because diabetes is a condition where your blood glucose level is too high, many people think they need to avoid sugars and foods containing sugar. However, if eaten as part of a healthy meal plan (for instance, incorporating herbal supplements like Organic Moringa Tea, Apple & Cinnamon tea or even superfoods), or combined with exercise, sweets and desserts can be eaten by people with diabetes. The key is to eat everything in moderation.

Myth – Diabetes can be prevented

Fact – Not all types of diabetes can be prevented. Type 1 is an autoimmune condition; there is no cure and no prevention. We do not know what causes type 1 diabetes.