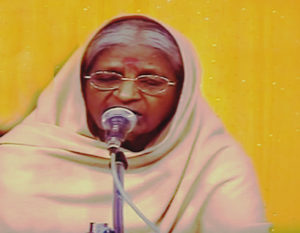 Veteran Gujarati folk singer Diwaliben Bhil, who had a huge fan following across the state, passed away in Junagadh at the age of 80. Apart from folk songs and garba songs, Diwaliben had also lent her voice to several film songs. Born in a tribal family in the Gir forests, Diwaliben became famous after a team from All India Radio heard her singing and aired a recording of one of her garbas in a programme.

She was invited to sing on All India Radio and recorded herfirst song, Ful Utarya fulwadi ae re lol”. A self-taught artiste, she went on to sing many more songs for All India Radio and Doordarshan, perform at hundreds of stage shows in India and abroad and record songs for films. The Union Government honoured her with the Padma Shri in 1991.

Prime Minister Narendra Modi condoled the passing away of Diwaliben. “Sad to know of passing away of well known Gujarati folk singer Diwaliben Bhil. Her contribution to the cultural sphere is monumental. RIP,” he said on micro-blogging site Twitter.