The Mission Indradhanush was launched by Ministry of Health and Family Welfare (MOHFW) Government of India on 25th December, 2014. The objective of this mission is to ensure that all children under the age of two years as well as pregnant women are fully immunized with seven vaccine preventable diseases. It aims to immunize all children against seven vaccine preventable diseases namely diphtheria, whooping cough (Pertussis), tetanus, polio, tuberculosis, measles and hepatitis B by 2020.

Full immunization against preventable childhood diseases is the right of every child. With a view to provide this right to every child, the Government of India launched the Universal Immunization Program (UIP) in 1985, one of the largest health programs of its kind in the world. Despite being operational for over 30 years, UIP has been able to fully immunize only 65% children in the first year of their life and the increase in coverage has stagnated in the past 5 years to an average of 1% every year.

The Mission Indradhanush, depicting seven colors of the rainbow, targets to immunize all children against seven vaccine preventable diseases, namely:

In addition to this, vaccines for Japanese Encephalitis (JE) and Haemophilus influenzae type B (HIB) are also being provided in selected states.

What is the need of this Mission?

How it will work? 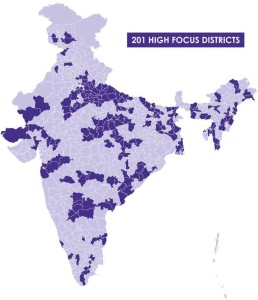 The Government has identified 201 high focus districts across 28 states in the country that have the highest number of partially immunized and unimmunized children.

Mission Indradhanush will target these districts through intensive efforts and special immunization drives to improve the routine immunization coverage in the country.

What is the Process?

Step 1: The ANM (Auxiliary Nurse Midwife) does the micro planning for holding immunization sessions, with the help of the ASHA (Accredited Social Health Activist) and AWW  (Anganwadi Worker).

Step 2: Since the AWW and ASHA are chosen from among the residents of the village, they maintain valuable records about immunization status of expectant mothers and children. Based on these records, a ‘due-list’ is prepared before each session.

Step 3: The ANM further enlists the help of Panchayat members, school teachers and village elders to motivate the families and mobilize them to attend the session.

Step 1: The ANM ensures that the vaccines are brought in a vaccine carrier with four conditioned ice packs, placed in shade and are not opened frequently. This helps maintain the temperature which ensures the efficacy of the vaccines.

Step 2: The ANM checks the labels for expiry date and VVM label of the vaccine vials before use.

Step 2: She greets the mothers, verifies the immunization record and age of the child and informs them about the vaccine that will be given and the disease it prevents. As part of the stringent safety protocol, the ANM uses auto-disable (AD) syringes for each shot and collects the used needles and syringes for safe disposal as per guidelines.

Step 3: The child is kept under observation for the next half hour and before letting the mother and child go, the ANM educates the mother about any minor event post immunization like mild fever and how to deal with it. She writes the next date for vaccination in the immunization card and informs her when to come for the next visit.

Along with immunizing children, the ANM maintains meticulous records, recording and tallying all immunizations against the due list, sharing the dropouts with the AWW and ASHA so they can track them, maintaining a monitoring chart at the sub center and reporting all suspected cases of any diseases to the Medical Officer.

The Ministry will be technically supported by WHO, UNICEF, Rotary International and other donor partners.

Highlights of the first phase of Mission Indradhanush

The second Phase of Mission Indradhanush has been started from 7th October, 2015. The second, third and fourth rounds of this phase will start from 7th November, 7th December 2015 and 7th January 2016.

The aim is to achieve full immunization in 352 districts which includes 279 mid priority districts, 33 districts from the North East states and 40 districts from phase one where huge number of missed out children were detected.