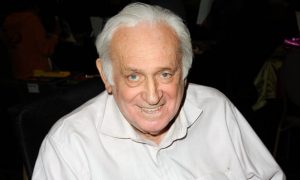 Carmine Caridi, who is best remembered for playing Carmine Rosato in “The Godfather: Part II,” has passed away at the age of 85. The veteran actor also appeared in the final part of “The Godfather” trilogy in a different role – Albert Volpe, an investor in Michael Corleone’s casinos who is killed in an attack at a hotel in Atlantic City.

Besides “The Godfather” series, he also starred in TV shows including Phyllis, Starsky and Hutch, Taxi, NYPD Blue as Detective Vince Gotelli and Fame as Angelo Martelli.

Interestingly, in 2004, Caridi became the first person to be expelled from the Academy of Motion Picture Arts and Sciences (AMPAS).

The Godfather is a 1972 American crime film directed by Francis Ford Coppola and produced by Albert S. Ruddy, based on Mario Puzo’s best-selling novel of the same name. It stars Marlon Brando and Al Pacino as the leaders of a fictional New York crime family.

The story, spanning 1945 to 1955, chronicles the family under the patriarch Vito Corleone (Brando), focusing on the transformation of Michael Corleone (Pacino) from reluctant family outsider to ruthless mafia boss.