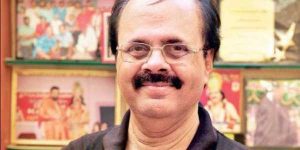 Crazy Mohan, who is a renowned dialogue writer in Tamil film industry, has died in Chennai. The veteran playwright passed away due to a cardiac arrest at a private hospital in the city. He was 67.

His real name is Mohan Rangachari and he was fondly known as Crazy Mohan because of his hit skit called Crazy Thieves In Paalavakkam. He then created a drama troupe called Crazy Creations. Chocolate Krishna, Maadhu +2 and Madhil Mel Maadhu were popular comedy plays, written by Crazy Mohan.

Crazy Mohan is also known for his collaborations with actor Kamal Haasan. He has written the dialogues for blockbuster films like Avvai Shanmugi (Chachi 420 in Hindi) and Michael Madana Kamarajan. He has also worked with Rajinikanth in the film Arunachalam.

He also worked in television shows like Crazy Times, Vidaathu Siripu and Siri Siri Crazy. Crazy Mohan was a recipient of Tamil Nadu State Government’s Kalaimamani Award for his excellence in the fields of arts and literature.

His last film as writer was Prabhudheva-Tamannaah’s Devi 2, which released on May 31.