A solar-powered pump is a pump running on electricity generated by photo voltaic panels or the radiated thermal energy available from collected sunlight as opposed to grid electricity or diesel run water pumps. 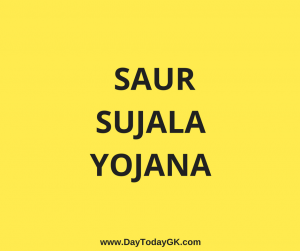 Chhattisgarh is a land of agriculture and irrigation. Saur Sujala Yojana is a Central government initiative directed towards the betterment and welfare of the farmers of the state of Chhattisgarh. Under this scheme, solar pumps will be distributed to the farmers which will help them in agriculture and irrigating their farm-lands. There are quite a many villages in Chhattisgarh where the distributions of electricity have not been possible till date by the state government. Hence the Saur Sujala Yojana will become a blessing for those farmers who want irrigation facilities that need electric power. Through these centrally subsidized solar pumps, they will be able to irrigate their lands by pumping water with the help of solar energy.

Chhattisgarh was the first state to implement the Saur Sujala Yojana. Under the scheme, solar powered irrigation pumps of 3HP and 5HP capacity worth Rs. 3.5 lakh and Rs. 4.5 lakh respectively would be distributed to the farmers  by March 31, 2019.

“The Centre is taking all necessary measures to promote farmers, villager and poor people”

Implementation of the scheme:

Features of the scheme: