An elephant on the rail tracks…if this was an Indian story, it would be about how the elephant was knocked down and died or was badly injured…but since I am talking about a New York Times cartoon, the elephant, which looks bigger than the train, has stopped the “climate train” in its tracks. 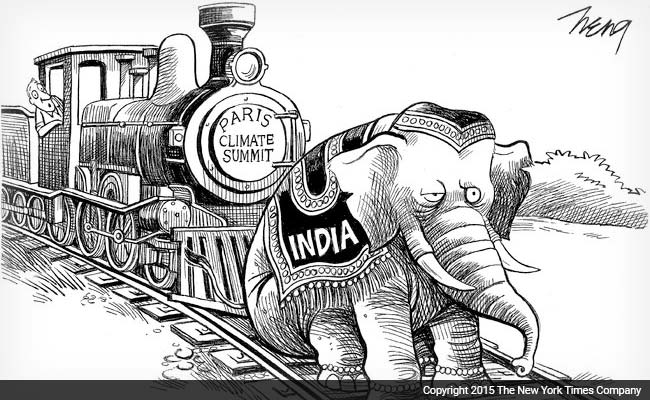 For weeks prior to the climate summit in Paris and most certainly since the summit began, the Western media has been busy portraying (depicting) India as a problem. The BBC did an article on how coal and coal production, if not regulated, will derail (To derail something such as a plan or a series of negotiations means to prevent it from continuing as planned. (JOURNALISM)) any climate change gains. NYT ran a big article on how PM Modi could make or break Obama’s climate legacy. The United States has been portraying itself as the country that created this summit and has taken credit for bringing together all nations for the discussion.

There are so many problems with that position that it is hard to begin to explain. Let’s first look at historic responsibilities. Since industrial times, the United States is responsible for 28% of the carbon that is in the atmosphere right now, according to this report. This enabled them to really grow as an economy, to become one of the most powerful countries in the world. India has been responsible for less than 3% of that historic carbon and rightly feels that common but differentiated (A quality or feature that differentiates one thing from another makes the two things different.) principles must apply when it comes to dealing with emission cuts for climate change. It seems only fair that the country that has the biggest historic carbon footprint pays more.

Secondly, even today the United States consumes 19 times more electricity that India, produces nine times more of its power from coal than India; the US per capita consumption of coal is 12 times more than India’s.

Thirdly, the United States has always been the actual blocker at climate summit, by not even ratifying (When national leaders or organizations ratify a treaty or written agreement, they make it official by giving their formal approval to it) the Kyoto Protocol which was introduced in COP 3 in 1997. The Kyoto Protocol failed largely because the United States backed out. All the way back in 1997 they objected to the common but differentiated principles when it came to paying for climate change. At the time, India and China had insisted that developed nations do more. Since then, China has emerged as the world’s largest emitter, India is the 4th largest. But even here the numbers speak for themselves. While India is fourth on the list, it is only at 6%. China is at 26% and the United States is at 14.4%. India also has 300 million people who live with no electricity.

That India has asked the developed world to quit the carbon space to allow developing nations to grow is entirely fair in the light of these facts. The developed world has also reneged on promises (If someone reneges on a promise or an agreement, they do not do what they have promised or agreed to do.) made at previous climate summits to pay a 100 billion dollars annually upto 2020 into a green climate fund for developing nations to help them adapt and to put in place systems for technological transfers to help them switch to renewables at a cheaper rate. The money, many of the developing nations, say should not be seen as aid, but as reparation for historical damages (Reparation is help or payment that someone gives you for damage, loss, or suffering that they have caused you.) from the carbon already in the atmosphere that has caused the world to warm by 1 degree.

Even in the intended nationally determined contributions, or the commitments made by different countries to the summit, the United States has shown no ambitious steps.

They have said they will cut emission to 28% pre-2005 levels by 2030, while India has committed to 35%. The US talks about being on track to get to carbon neutrality by 2080, but their lateral move over the years from coal has been to natural gas and not renewables in any big way. India has committed to switching to 40% renewables by 2030. Even if it is ambitious, at least we are making strides.

The United States government cannot even agree internally on climate change. While Obama is keen to seal a deal in Paris, as he sees it as a legacy of his office, the opposition or the GOP has consistently denied climate change, with Donald Trump, the leading Republican candidate for President, openly denying climate change on FOX Television.

In India, the entire government agrees that climate change is one of the biggest threats we have. While the United States is 8 times the size of India, they have in their race to develop, lost most of their bio diversity. India is one of the 17 mega-diverse countries in the world.

There is no doubt that India needs to do as much as it can, if not for the world, just for its own people. 13 of the 20 most polluted cities in the world are in India. Our cities are reeling with bad environment and urban decisions. We have seen extreme weather events affect millions of people across the country. Things are only going to get worse. However, to have the United States pointing fingers is the height of hypocrisy (If you accuse someone of hypocrisy, you mean that they pretend to have qualities, beliefs, or feelings that they do not really have. = पाखण्ड).

The world has gathered to try and ensure a deal that will keep global temperatures from rising above 2 degrees celsius. We have a very short window to make a difference but no deal that is worth anything will be possible if countries do not pull the train according to their weight. So if we are elephants, the United States is a T-Rex.

As a citizen of this world, it worries me that this petty political wrangling (If you say that someone is wrangling with someone over a question or issue, you mean that they have been arguing angrily for quite a long time about it.) could stop us from an opportunity to really make a difference.