Ramon Magsaysay Award is an annual award established to honor former Philippine President Ramon Magsaysay. The prestigious award is being given to outstanding individuals/organizations – regardless of race, creed, nationality and gender – who manifests greatness of spirit in service to the Asian people since 1958. The Ramon Magsaysay Award is often considered to be an Asian equivalent to the Nobel Prize. The prize was established in April 1957 by the trustees of the Rockefeller Brothers Fund based in New York City with the concurrence of the Philippine government.

The awards were given in six categories, five of which were discontinued effectively in 2009. The categories are,

The below table contains the details of Indians who won the prestigious award. Keep visiting our website regularly for updated information on various topics relating to General Knowledge. Face your competitive examinations with full confidence. 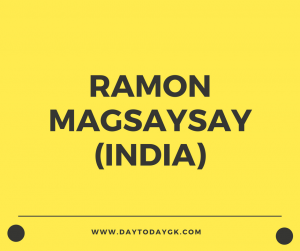