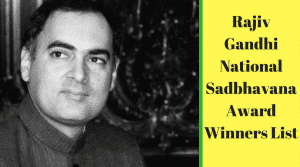 Rajiv Gandhi National Sadbhavana Award was instituted in 1992 by by All India Congress Committee of the Indian National Congress in memory of the former Prime Minister late Rajiv Gandhi. This award is given every year to distinguished men and women who have devoted their life to fostering amity, understanding and promoting social harmony.  The Award carries a citation and a cash award of Rupees 10 lakhs. It is given on 20 August, the birth anniversary of Rajiv Gandhi, which is celebrated as Sadbhavna Diwas (Harmony Day).

As of 2017, there have been seventeen recipients of Rajiv Gandhi National Sadbhavana Award.