South Africa’s Mickey Arthur has been appointed head coach of Pakistan ahead of this summer’s tour of England. The 47-year-old former South Africa and Australia coach takes over from Waqar Younis, who resigned last month. He led South Africa from 2005-10 and Australia from 2011-13 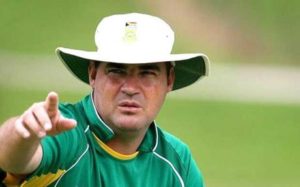 but was sacked 16 days before the 2013 Ashes series in England. Former England coach Peter Moores and Australian Stuart Law were among those linked with the position.

Pakistan Cricket Team is touring England for the first time since 2010. The first of four Test matches begins at Lord’s on 14 July, with five one-day internationals and one Twenty20 match to follow.

John Michael “Mickey” Arthur is a South African cricketer who played South African domestic cricket from 1986 to 2001. He coached the South African national team from 2005 to 2010, and was the coach of the Australia national cricket team until his sacking on 23 June 2013. Arthur scored 6557 runs playing for Orange Free State, Griqualand West and South Africa A before retiring in 2001. He is Currently appointed as Head Coach of Karachi Kings in Inaugural edition of Pakistan Super League (PSL).