Padma Award Winners 2017 – one of the highest civilian Awards of the country, are conferred in three categories, namely, Padma Vibhushan, Padma Bhushan and Padma Shri.

‘Padma Vibhushan’ is awarded for exceptional and distinguished service;

‘Padma Shri’ for distinguished service in any field.

The awards are announced on the occasion of Republic Day every year.

The list of 2017 Padma award winners. The list comprises of 7 Padma Vibhushan, 7 Padma Bhushan and 75 Padma Shri Awardees.  19 of the awardees are women and the list also includes 5 persons from the category of foreigners, NRIs, PIOs and 6 Posthumous awardees. 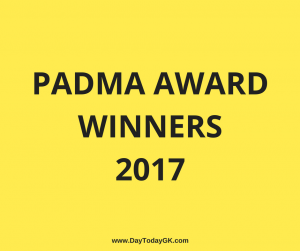