India moved a step closer to the implementation of the Goods and Services Tax (GST) regime, as its Parliament’s Upper House, the Rajya Sabha, approved The Constitution (122nd Amendment) Bill, 2014 with 203 votes in favour and none against. The GST, which is expected to be implemented from April 1, 2017, aims to replace multiple state and central levies with a single tax. Since the central and state taxes are likely to be included under GST, it may result in reduction of tax credits across intra- and inter-state transactions.

GST is one indirect tax for the whole nation, which will make India one unified common market. GST is a single tax on the supply of goods and services, right from the manufacturer to the consumer.  The final consumer will thus bear only the GST charged by the last dealer in the supply chain, with set-off benefits at all the previous stages.

In other words, the prices that we pay for goods and services have the taxes embedded in them. Mostly, the consumers are not even aware of or ignore the tax they pay for things they buy. This is because there is a list of indirect taxes such as sales tax, excise and VAT, which leads to increased complexity. The GST seeks to sort out this and include all in one single tax, thereby making India an economically unified market. The Empowered Committee of State Finance Ministers, which deliberated on the tax and its implications, has recommended what all taxes are to be included in the GST:

In the Central taxes: 1) Central Excise Duty; 2) Additional Excise Duties; 3) The Excise Duty levied under the Medicinal and Toiletries Preparation Act Service Tax; 4) Additional Customs Duty, commonly known as Countervailing Duty (CVD); 5) Special Additional Duty of Customs – 4% (SAD); 6) Surcharges, and 7) Cesses.  State taxes: 1) VAT / Sales tax; 2) Entertainment tax (unless it is levied by the local bodies); 3) Luxury tax; 4) Taxes on lottery, betting and gambling; 5) State Cesses and Surcharges in so far as they relate to supply of goods and services; and 6) Entry tax not in lieu of Octroi.

According to analysts from a macro-economic perspective, the short-term impact of GST could be mixed, the long-term impact will be positive.

What will be the Impact??

GST will turn India into one common market, leading to greater ease of doing business and big savings in logistics costs from companies across all sectors. Some companies will gain more as the GST rate will be lower than the current tax rates they pay, others will lose as the rate will be higher than the present effective rate. While the rate of GST is yet to be decided, industry observers have assumed an 18% rate recommended by a government panel in making their impact calculations. 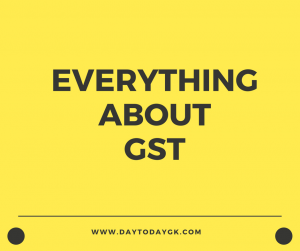 How it really works??

In short, look at this example..

Imagine a manufacturer of, say, shirts. He buys raw material or inputs — cloth, thread, buttons, tailoring equipment — worth Rs 100, a sum that includes a tax of Rs 10. With these raw materials, he manufactures a shirt. In the process of creating the shirt, the manufacturer adds value to the materials he started out with. Let us take this value added by him to be Rs 30. The gross value of his good would, then, be Rs 100 + 30, or Rs 130. At a tax rate of 10%, the tax on output (this shirt) will then be Rs 13. But under GST, he can set off this tax (Rs 13) against the tax he has already paid on raw material/inputs (Rs 10). Therefore, the effective GST incidence on the manufacturer is only Rs 3 (13 – 10).

Thus, the total GST on the entire value chain from the raw material/input suppliers (who can claim no tax credit since they haven’t purchased anything themselves) through the manufacturer, wholesaler and retailer is, Rs 10 + 3 +2 + 1, or Rs 16.

How it would be in a non-GST case?

In a full non-GST system, there is a burden of “tax on tax”, as there are no set-offs for taxes paid on inputs or on previous purchases.
Thus, if we consider the same example as above, the manufacturer buys raw materials/inputs at Rs 100 after paying tax of Rs 10. The gross value of the shirt (good) he manufacturers would be Rs 130, on which he pays a tax of Rs 13. But since there is no set-off against the Rs 10 he has already paid as tax on raw materials/inputs, the good is sold to the wholesaler at Rs 143 (130 + 13).

What will the Bill in Parliament today do?

It basically seeks to amend the Constitution to empower both the Centre and the states to levy GST. This they cannot do now, because the Centre cannot impose any tax on goods beyond manufacturing (Excise) or primary import (Customs) stage, while states do not have the power to tax services. The proposed GST would include various central (Excise Duty, Additional Excise Duty, service tax, Countervailing or Additional Customs Duty, Special Additional Duty of Customs, etc.), as well as state-level indirect taxes (VAT/sales tax, purchase tax, entertainment tax, luxury tax, octroi, entry tax, etc). Once the Bill is passed, there will only be a national-level central GST and a state-level GST spanning the entire value chain for all goods and services, with some exemptions.