Home » SEBI » All you need to know about SEBI

SEBI was established in 1992 by passing of the Securitites and Exchange Board Act. This board was established to protect the interests of investors in securities and to promote the development and regulation of securities market. It extends to entire India. SEBI is headquartered in the business district of Bandra Kurla Complex in Mumbai, and has Northern, Eastern, Southern and Western Regional Offices in New Delhi, Kolkata, Chennai and Ahmedabad respectively. It has opened local offices at Jaipur and Bangalore and is planning to open offices at Guwahati, Bhubaneshwar, Patna, Kochi and Chandigarh in Financial Year 2013 – 2014.

The SEBI is managed by its members, namely 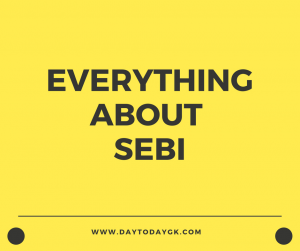 SEBI has to be responsive to the needs of three groups, which constitute the market:

SEBI has three functions rolled into one body: quasi-legislative, quasi-judicial and quasi-executive. It drafts regulations in its legislative capacity, it conducts investigation and enforcement action in its executive function and it passes rulings and orders in its judicial capacity. Though this makes it very powerful, there is an appeal process to create accountability.

For the discharge of its functions efficiently, SEBI has been vested with the following powers:

5) Who is the current chairman of SEBI?
a) Upendra Kumar Sinha
b) Arundhati Bhattacharya
c) Uday Dharamlingam
d) None of These